Since ancient times people were preoccupied in combat the visible effects of aging skin especially on the face. For this purpose, since the time of ancient Egypt used different substances that were intended to moisturize the skin, which can be considered the first cosmetics. During this time have been used the first chemicals with which to achieve stain removal hyper and hypopigmented, thus obtaining a visibly younger skin.

We can talk about beginnings of chemical peeling.
Over the years have used many substances and techniques (different chemical peels, microdermobrazie) these results with more or less satisfactory. The major problem was the inability control of layer thickness removed by using these procedures.
The introduction and improvement of laser devices in aesthetic medicine has made ​​strict control of layer thickness of the epidermis removed and hence obtain superior results. Fascicles with different wavelengths such as CO2 laser with wavelength of 10600 nm, the laser Er: YAG 2940 nm wavelength, Nd: YAG laser with wavelength of 1064 achieved penetration at different depths in the dermis depending on the wavelength and treat a wide variety of ailments.

In the material below we analyze the effects of CO2 laser wavelength 10600 nm. This was the first laser used in cosmetic surgery for the following conditions:
– Removal of superficial and deep wrinkles;
– Hyper and hypopigmented stain removal;
– Removing scars post acne;
– Reduction of various traumatic scars. 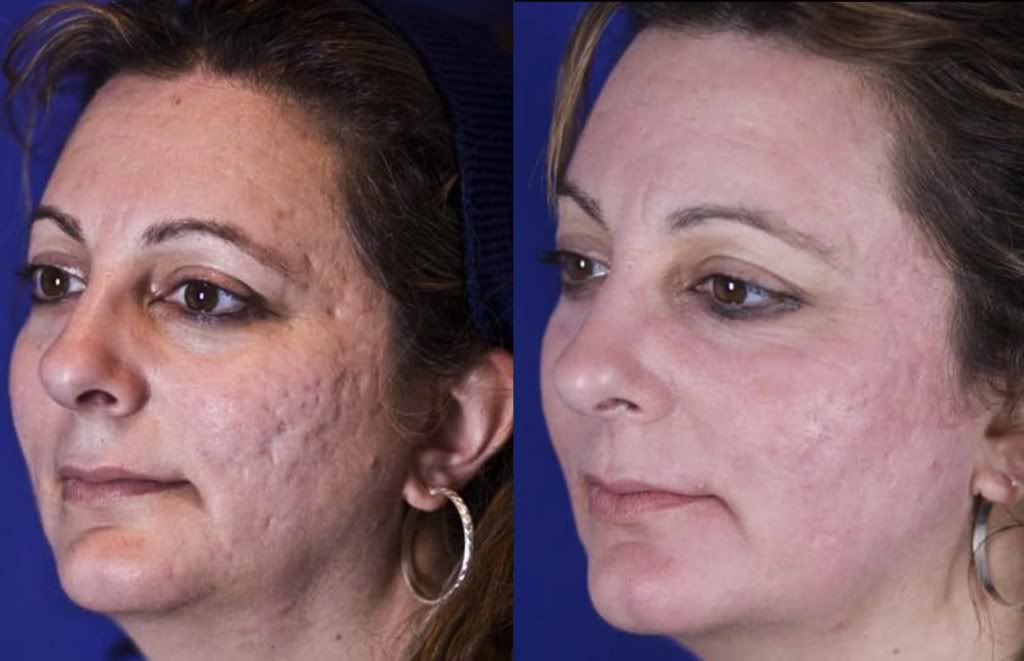 In plastic surgery is used to remove skin tumors.
By using the CO2 laser in the treatment mentioned above is performed:
1. evaporation of a controlled thickness of the dermis thereby obtaining hyper and hypopigmented stain removal (including melasma), post acne scars diminish, reduce superficial wrinkles, and reduce enlarged pores.
2. thermal effect held in depth due to energy of laser beam which results in controlled heating of deep layers and hence stimulate the synthesis of collagen network leading to decrease in stretching skin and deep wrinkles.
This the 2nd effect is what makes the difference between classical procedures (chemical peelings and microdermobraziile) and laser treatment, first without realizing deeply stimulating the synthesis of collagen network (which is known to be holder skin’s support and its synthesis decreases after the age of 24 years).

Just by treatment with CO2 laser, because of its thermal effect is obtained the synthesis of collagen network stimulating, by default stretching skin and hence result in reduced and deep wrinkles along those superficial.

These benefits are possible because of fractional procedure that is between 120-500 cm square columns epidermis evaporated instantly. Thickness is evaporated by the laser beam depending on the duration and intensity of of laser beam pulse.

Thermal effect remains unchanged and in case of fractional treatment also depth of penetration is also controlled by the duration and intensity of the laser pulse.

Thermal effect remains unchanged and in case of treatment fractional and depth of penetration is also controlled by the duration and intensity of the laser pulse.
Following treatment with fractional laser on treated surfaces have dermis columns surrounded by disobedient evaporated skin laser beam effect, thus is hasty re-epithelization (healing) surface treated by re-epithelization and obtain a more pronounced stretching of the skin.

From the above it can be concluded that the present CO2 fractional laser peeling ultra pulsed give the best results in aesthetic medicine with extraordinary results in facial rejuvenation.