On October 5, 2014 at the Palace Hall in Bucharest, Romania, Al Bano and Romina Power will delight fans with their most famous pieces, at the event under the name “Al Bano featuring a very special guest – Romina Power” 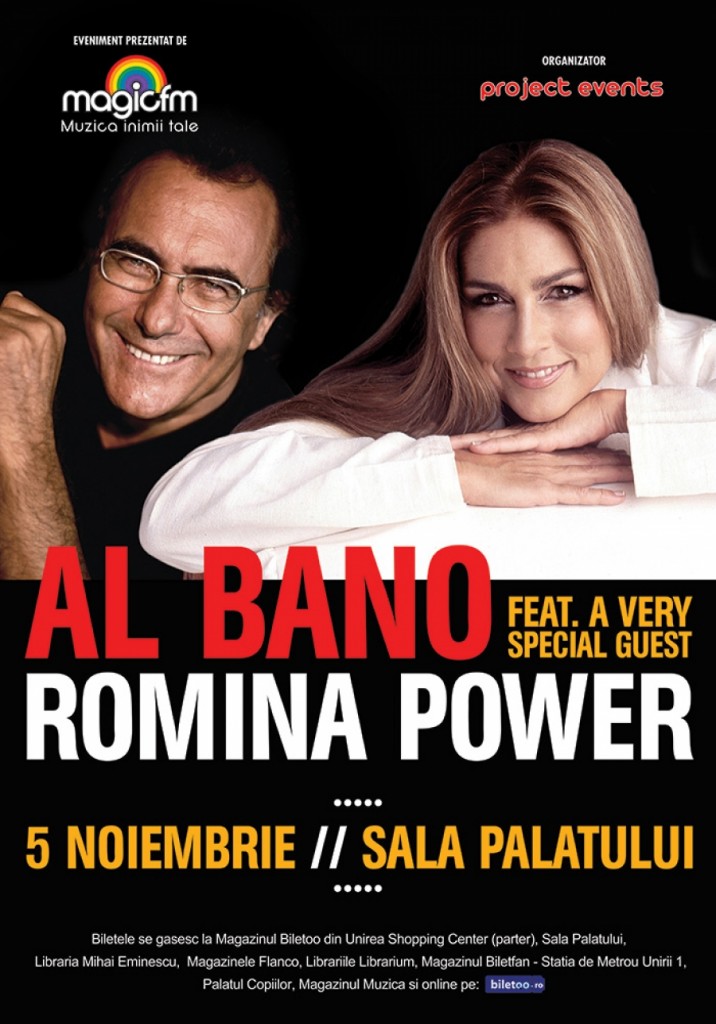 As promised at the last concert, Al Bano and Romina Power will take the stage together again to give us an unforgettable musical show, this time in the Romanian capital Bucharest. Al Bano and Romina Power were concerted last time in Moscow, on 17th and October 18th 2013, after Andrei Agapov had tried to convince them to play together again, for months, speaking separately with Romina and Al Bano.

“The discussions for this project began last autumn and behold finally ended. Most beloved 80s couple met and, yes, coming to Bucharest! On November 5th the dream of a generation will be fulfilled: “Felicita” will be sung live by Romina Power and Al Bano in Palace Hall “communicate organizers, Project Events.

Romina Power has agreed to sing again with her ​​ex-husband Al Bano, on 17 and October 18 2013 in Moscow with their first concert after reconciliation. “After everything that has happened, it is still the father of my children and the man that I loved and it is important to leave behind the old feelings of resentment,” said Romina Power as, according to international press magazines. In turn, Al Bano said: “I lived with Romina an exceptional period”. The famous couple has married in July 26, 1970 and after their love resulting four children: Ylenia, Yari, Cristel and Romina Iolanda. The couple broke up in 1999, divorce the two is caused by the disappearance of their daughter, Ylenia, in 1994, in USA.

Few people know that Romina was first film partner and then partner in life to Al Bano. In 1968 filming with the man which would become her husband (1970), Albano Carrisi, and will form a couple of pop singers, famous throughout the world. In 1982, the two singers, wins 2nd prize in San Remo with a song that go around the world like wildfire: “Felicita”! Al Bano and Romina Power were both envied as couple in music – on stage and as couple in life until the fateful day came, a huge misfortune deviating on them. On January 6, 1994, their eldest daughter – Ylenia disappeared mysteriously being seen for the last time in the neighborhood “French Quarter” in New Orleans.

Songs that will be interpreted are already well known to fans, “Ci Sara”, “freedom”, “Dialogo”, “Acqua di mare”, “Sharazan” and longstanding hit “Felicia”. Palace Hall in Bucharest for the first time enjoys the appearance of the two artists, Al Bano and Romina Power, and expect it to be full on the day of the concert.

Although it’s not long before Al Bano and Romina Power will perform together on stage for the first time at the Palace Hall in Bucharest (Al Bano also concerted, but single), the artists wanted to greet fans and invite them to event! In a video message recorded in August 2014 the famous duo components communicate fans that evening of November 5, 2014 will be unbelievable and that will play the biggest hits of their own.

The loved couple of the 80s revived and seems more fresh than ever! Throughout the video, so excited that when broke the international charts, the two former couple partners and current scene partners giggled and got teased: Romina laughed when Al Bano said that will play the biggest hits “from yesterday, from today and tomorrow”, saying it does not quite clear how to do so and Al Bano has practiced a little Romanian language, saying “thank you”. Toward that end, Romina had the impression that the former husband has not said the right location of the concert and took the sheet from his hand, checking syllable by syllable. Al Bano assured her that said the correct name of the hall because there has concerted 5 times here, for her being the first time.