Russians paid $ 2.6 million to bring the Italian disbanded duo to the stage after a divorce known worldwide. 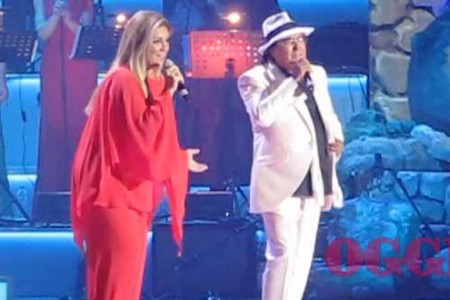 Wonder was produced in Moscow! Famous singers Al Bano and Romina Power have played together for the first time, 19 years after the last appearance on stage in couple and 14 years since the divorce.
Al Bano (70 years) and Romina Power (61 years old) sang their famous hits in two concerts in Moscow Crocus Hall yesterday and the day before (17 and 18 October). The 8,000 spectators every night enjoyed in delirium their great success: Liberta Dialogo, Acqua di mare, Ci sara, Sharazan. “FELICITA” world famous hit was singing along with their children, Cristel and Yari. Tickets, which cost between 100 euros and 1,000 euros were sold out quickly, so organizers want them to participate in a show Saturday. The one who barely managed to convince to sing together again was Andrei Agapov, making it clear that he paid 2.6 million dollars to bring in Moscow along with other Italian celebrities, according to Oggi. Earnings following the show would have reached 10 million. Agapov had tried to convince them to play together again, for months, speaking separately with Romina and Al Bano, relatives contributing to reconciliation that seemed impossible. Relations between the two were “diplomatic” staying at the Ritz-Carlton Hotel in different rooms. Artist mother, Jolanda, 91 years old, accompanied to Moscow to see singing together at least once. They were accompanied by their children and the children of Al Bano in relation to Loredana Lecciso (41 years), Jasmin (12) and Albano Junior (11 years).