Time since the last cigarette smoked brings to the smoker benefits of what is not always conscious. Far from being myths, at least some of these benefits are easy to see even by the person making the decision to quit, shortly after the last cigarette.
Thus, every time when are more than 20 minutes of the last smoke, smoker’s blood pressure drops to normal levels. This can be checked by simply measuring blood pressure immediately after a cigarette and 20-25 minutes after that.
Any smoker unknowingly benefit every night by the fact that take a break of sleep for 8 hours, during which does not smoke. Until morning, in 8 hours of sleep, the level of carbon monoxide in the blood falls by half and oxygen levels reach normal levels. Every smoker knows that first morning cigarette is one who produces some feeling dizzy.

Along with cigarette in the morning, blood pressure rises again over normal again carbon monoxide levels again begin to grow, while oxygen levels decline begin to.
If the smoker does not smoke 48 hours (ie, for example, an entire weekend – two days) begins to reduce the risk of heart attack and nicotine is eliminated completely from the body. Because of this, those who quit smoking feel that is the hardest to resist the temptation to light a cigarette just at the end of 48 hours of abstinence, because the body has not yet escaped the addiction, but perceived lack total drug and therefore it “requires” very strongly.

Also after 48 hours of no “smoking” senses of taste and smell returns to normal.
After another 24 hours of the first 48 (over 72 hours) newly nonsmoker will feel has more energy. Also the bronchial tubes are relaxing. 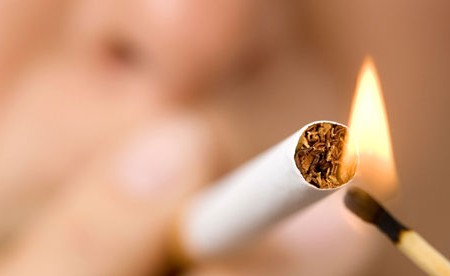 Between 2 weeks and 10 weeks after the last cigarette the blood circulation improves continuously. Disappears the feeling of “heavy legs” ankles become more flexible, some veins and capillaries become less noticeable under the legs skin.

In about 3 weeks after the last cigarette nicotine addiction body is completely outdated and newly smoker can be sure that it will not experience any symptoms associated with withdrawal. However, even a smoke that introduces into the body a little nicotine wake addiction again.

Between 3 and 9 months after quitting smoking, increases lung capacity by 10%, which is easily felt by former smokers by improving breathing, increased stamina and significant reduction or even disappearance of tabacic cough.

After the first year former smoker has 50% less likely to suffer a heart attack. This, as well as those listed below are proven statistically.

After 15 years from the last cigarette, former smoker can be considered from all points of view, the risk of a heart attack reaching normal statistical limits for people who never smoked.

So quit smoking now, as there is time and have not already passed 15 years, that you can no longer recover.