Cervical cancer is the 2nd most common cancer form worldwide and the most common cancer of women in developing countries.
Every day in the world die women different ages by a cancer that could be prevented and treated appropriately, if diagnosed in time. Unfortunately this not happens.

Why?
Patients refuse gynecological consultations different reasons:
– they feel good (they have nothing, no symptoms) without knowing that a malignant disease (cancer) does not give any symptoms until the terminal stages of the disease, and then you can do anything unfortunately.
– Financial reasons (go to the doctor cost me … better buy something with that money)
– Negligence (now I’m tired, I’m not hurting anything …)
– Lack of time (I have a lot of work, I better rest and watch a movie …)

And so on … reasons and motivations are always found when we want to avoid something. Any lesion (wound) on the 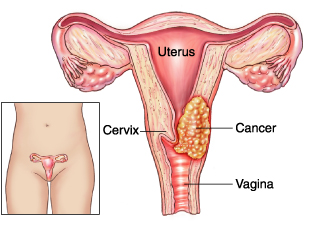 cervix untreated and undetected not resting, not sleeping, not asking for money, but continues to develop; If the beginning is a millimeter lesion over time grow and reach phase when they occur:

– Bleeding / pain sexual contact and spontaneous;
– Intermenstrual bleeding;
– Bleeding at menopause, free and abundant blood clot – usually the stage where the patient comes to the hospital, and during the biopsy is diagnosed cervical neoplasm (cancer).

What can we do to help?
Stop the bleeding, in the best case, depending on state, can operate, remove the tumor, but follows a tough chemotherapy, radiotherapy, and chances of survival are dependent of the stage, the results may not always be the desired and after a lot of suffering to follow death.

What can you do to prevent this?
A gynecological examination per year (at least). Is it more expensive than life? Certainly not.

In what consists this control?
It is the cytologic examination: doctor collects secretions from the cervix and following a specific staining and microscopic analysis to see whether the cells are normal or modified (potentially malignant).

But there are higher risks in some patients:
– Early onset of sexual activity;
– Multiple partners;
– Infection with Human Papillomavirus (sexually transmitted virus and not only) generally asymptomatic, leading over time to the emergence of small lesions with increased malignant potential based on viral serotype; There is now a vaccine against infection with Human Papillomavirus potentially oncogenic viral serotypes, which could decrease the mortality rate of cervical cancer in the future;
– Other infections, even if they are asymptomatic or symptomatic;
– age of puberty;
– Age of menopause;
– Age at birth of first child;
– Number of abortions (spontaneous, induced);
– Parity (no. Births);
– methods of contraception – hormonal factor;
– Nutritional factors;
– Age: if before it was believed that malignancies  are specific of older age, now, after the latest studies and research, there was an increasing frequency of cervical cancer at young ages.

Screening and early diagnosis:
Decreased mortality rate of cervical cancer (cervix) was observed in countries where it was practiced asymptomatic detecting of population.

How is it?
Examination of cervical lesions and cervical + biopsy histopathological examination, colposcopy / biopsy targeted by within the HPV lesion (Human Papilloma Virus).
Remember: Life is a gift … you decide what to do with it !!!