Divorced parents are often overwhelmed by its sentimental failure and commit a number of mistakes against children resulted from the marriage, the biggest victims of conjugal separation.

They often underestimate the powerful psychological impact of the major changes on the emotional component of children who are prone to severe dysfunction of personal and social order. 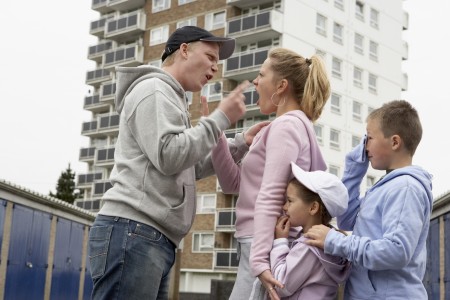 Psychological stress to which children are exposed can cause emotional sequels that persist into adulthood and is reflected in poor interpersonal relationships and mental lability difficult to control.

Even if specialists in couple and family therapy confirms that a divorce is sometimes the only way to restore balance in the lives of those involved, the way that adults manage the whole situation is very important for normal mental development of children. The following serious mistakes committed by many parents who are divorcing, according to psychologists, are the main negative factors that need to be removed with the dissolution of a marriage.

Using Child as a Messenger

Communication between two divorced spouses is disturbed by many factors, from the frustrations and resentments to fight vanity that tends to catch proportions every time. For this reason, many parents turn their children into primary means of communication to avoid direct confrontations difficult to manage.

This is the first serious mistake which they are committing, says family counselors,  because the child is transformed into a messenger, they exposes him to an even higher level of emotional stress and forces him to play the role of negotiator, a burden too heavy for a young and vulnerable age. Moreover, the child already emotionally wounded by parental separation should be spared.

Sabotaging the Child’s Relationship with the Other Parent

One of the worst scenarios for a child is to be forced to choose between mom and dad. This injustice to which many divorced parents put their children leads at the birth of guilt, suffering, anxiety and confusion.

The induction of the idea of hatred towards the other parent, portraying him in a negative light and, worst, prohibition maintaining a close relationship with mom or dad for various reasons are errors that can be perceived as an open gate of the child for unhappiness, depression, hopelessness and unhealthy perception on the relations between two adults.

In these difficult moments, children need to feel understood, not handled. Criticism of the other parent of the child will be perceived as criticism brought to himself.

Transformation of the Adolescent in its own Therapist

Teenagers like to feel they have some control, and parental divorce negatively affect exactly this sense of stability. Their seemingly detached attitude can mislead and give a parent feel like he can confess without reservation.

Psychotherapists says  that parents who freely express their anger, sorrow and aggressive ideas in front of teenagers are committing a serious mistake because they only fuel the anxiety and fear of loss of control that the child is trying to suppress.

Punishing the Child by Prohibiting Contact with the other Parent

Every child has the right to maintain a close relationship with both parents, so its punishment is a major mistake by banning contact with mom or dad. Access to the affection and attention of both parents must not be a means of discipline, under any circumstances. Otherwise, the child may develop some negative feelings toward the father who violate this fundamental right, visible in time through deviant behaviors.

Underestimating the Understanding of the Child

Another error committed by many divorced parents is that they underestimate the extent to which the child understand what is happening around. Therefore, adults says and do things with great emotional impact, without assessing the long-term consequences. At one point, the child begins to show behavioral disorders in the intimate and social caused by the trauma on which he was subjected.

Overwhelm the Child with Materials Attentions

After a divorce, often, parents tend to buy attractive gifts for children so to reward somehow the suffering caused. This handling strategy may work temporarily , but at some point, the child will realize what is happening and will feel used.

Parents who crosses a painful divorce make mistakes from impulsivity and then realize their own errors made ​​unintentionally. Psychologists says it is never too late to remedy the harm done, because children have a remarkable power to forgive, at least until the end of adolescence (when anger tends to dominate reason).