Michael Phelps was arrested again. This time he was caught by police while driving passenger car Land Rover with a speed of 84 miles per hour in a section of road where the speed limit was only 45 mph.

Swimmer, winner of many Olympic gold medals, was arrested Tuesday at around 01.40 am after he was stopped by a Maryland police radar crew on Southbound I-395 leaving Baltimore.

Olympic swimmer Michael Phelps has returned in April this year to swim competition.
He said on his Twitter account that he realizes the situation is and the seriousness of the offenses for which he is charged.

He publicly apologized for what happened. 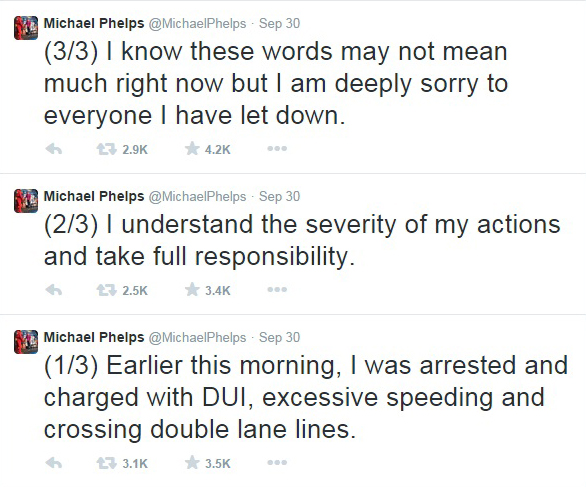 According Maryland Transportation Authority, Phelps was arrested for several criminal offenses, respectively driving under the influence, excessive speed and crossing the double lane Fort McHenry Tunnel Within lines on I-95 in Baltimore. Sportsman was later released.

American swimmer, winner of 22 Olympic medals, including 18 gold Olympic medals, has been arrested 10 years ago at the age of 19 years, all for driving under the influence in Salisbury, Maryland. Then the court released him on bail and gave him a trial period of 18 months.

USA Swimming issued a statement Tuesday afternoon in this case, expressing disagreement with the situation in which it was found swimmer Michael Phelps. They said it is disappointing the situation, and expects athletes to behave responsibly and out of the pool.