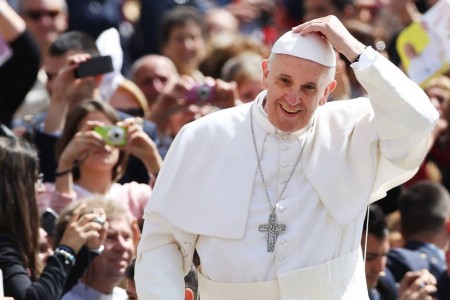 Pope Francis, after Returning from Brazil Where He Attended the World Youth Day : “Who Am I to Judge Gay People?!”

Upon returning from Brazil, where he attended the World Youth Day, a biennial celebration that gathers millions of young people around the world, Pope Francis argued that homosexuals should not be judged or marginalized.

Speaking to reporters during the return flight, the Pope said: “If a man is gay, God wants in his life and has good will, who am I to judge?”. Also, the Pope referred to the teachings of the Roman Catholic Church, which responded that although homosexual acts are sinful, not the orientation gay, shows BBC online edition. Pope’s remarks on homosexuality are more conciliatory than those made ​​by his predecessor, Pope Benedict emeritus. Five months after he took the Holy See, Pope Francis argued that homosexuals should be accepted by society. “Catechism explains it very well,” the Pontiff said. “(Catechism) says that should not be marginalized for this reason (of sexual orientation), but must be integrated into society.” On the other hand, the Pope condemned the gay lobby, whose presence in the Catholic Church has been talking in recent months. “The problem is not orientation (homosexual) (…) We are brothers. The problem is the guidance lobby or political lobbies. This is the most serious problem “, said the Pope. In his talks with reporters, the Pope touched the subject of women priests. Recalling that the Church’s position on this issue was very clear – a strongly negative response, the Pope said that the role of women within the religious community should not be limited. “We can not limit the role of women in the Church to simply copy to the altar, should be more”, said the Pope.