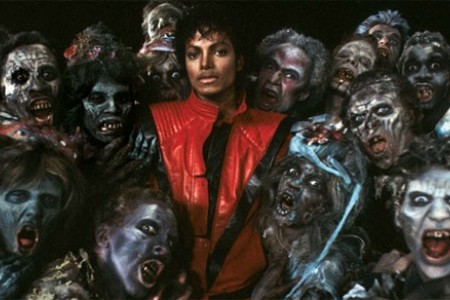 “Thriller “ broke all kinds of records. It sold more than 50 million copies worldwide [more than any other album before it or after] . The album had a record of six top 10 hits and has spent a record of 37 weeks at number one position. It remains the best selling album of all time. That year, Michael also won eight Grammy Awards, a number never seen before – 7 for “Thriller “ and one for ” ET – The Storybook “ . Most of the success of “Thriller “ was due to a new thing called ” video “ . Hits like ” Billie Jean “, ” Beat It” and “Thriller “ came to life right in front of our eyes with an interesting story and incredible dancing skills of Michael . The films of Michael not only helped to improve video environment, but broke the color barrier of MTV . ” Thriller “ by Michael Jackson made ​​him an international star .

Michael has played a crucial role in the charity project “We Are The World” , which was designed to fight hunger in Africa. He continued to work with his brothers as a component of the band “The Jacksons”  ,and ” Victory ” tour from 1984 has enjoyed a great success.

And what do you do after you’ve recorded the best selling album in history ? Recorded the second best selling album in history, of course! ” Bad “ Michael’s next solo project was released in 1987 and sold over 25 million copies worldwide and includes the hits ” I Just Can’t  Stop Loving You” , “The Way You Make Me Feel ” and ” Man In The Mirror “ . Accompanied by his first solo world tour in [ the largest world tour in history ], the  album ” Bad “  generated five consecutive No. 1 hits [ still unmatched performance ] .

In 1991 , with his next album, Michael continued astronomical sales of 23 million copies sold worldwide. The “Dangerous”  came videos more artistic and another world fantastic tour. Michael made ​​history with a 90-minute interview from 1993 with Oprah Winfrey. The interview was sent to the house of Michael, from Neverland in Santa Ynez , California and was the most watched television program in 1993 , attracting about 100 million viewers worldwide.

In full glory, Michael has faced in 1993 with accusations that rocked the world of show-biz. A boy of 13, known as a simply friend of the artist , claimed that Jackson sexually abused him during his stay in Neverland . Jackson was in “Dangerous” tour when allegations were made public. He had to postpone a few shows and finally to cancel the remaining concerts . After many actions set in motion by justice and after so many miseries claimed by the child’s family as well by the lawyers , concluded that against Michael Jackson cannot be brought any formal charges, for lack of evidences. Jackson opts to end this ugly episode from his life with an agreement out of court, paying the boy’s family with a sum of money estimated at 20 million dollars.

In 1994 , Jackson surprised the entire world , marrying with Lisa Marie Presley , daughter of rock and roll music – Elvis Presley. They were married in a private ceremony in the Dominican Republic. The marriage of the two has become for a while a new subject of speculation.