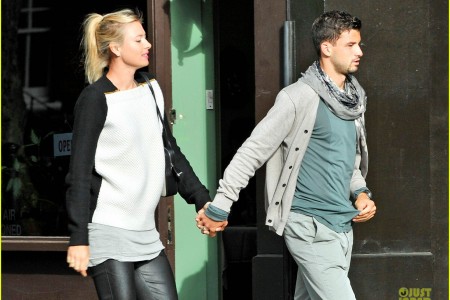 Bulgarians “throw the bomb”! Sharapova is pregnant with Bulgarian playboy! Bulgarian media says Maria Sharapova, the former world number 1 in women’s tennis, is pregnant with her ​​boyfriend, Bulgarian player Grigor Dimitrov. The media in Bulgaria has found out from the source, from Dimitrov, Sharapova lover, that Russian woman is pregnant. According to the site novini.bg, Maria and Grigor were spotted at dinner. During dinner, she refused to serve a glass of red wine, preferring to drink water. Sharapova was spotted apparently frequenting and one obstetric clinics in Los Angeles, even if she wear sunglasses.

Bulgarian newspapers writes that this would be the reason that Sharapova would miss the WTA Championships in Istanbul, not shoulder injury as she said. Sharapova has canceled wedding this autumn with a basketball player in the NBA and coupled with Dimitrov, Bulgarian tennis player who has previously had a relationship with Serena Williams.

It seems that Bulgarian Grigor Dimitrov is in top form, he already won the tournament in Stockholm, after defeating David Ferer, no. 3 worldwide, 2-1 (2-6, 6-3, 6-4). Dimitrov is currently participating in Basel tennis tournament with prizes totaling 1.98 millions of dollars, being already in the quarters-finals where will meet Roger Federer.