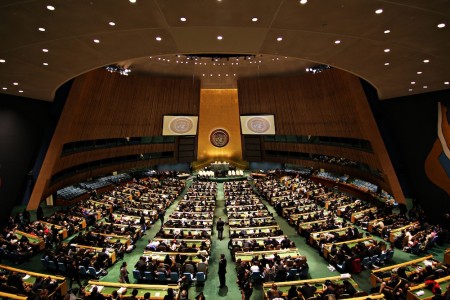 A report on the evolution of climate over the XXI century “escaped” from the UN and presents gloomy conclusions. It will be officially released in March, but until then can be read by the world’s governments.

Excerpts from a recent report on the evolution of climate over the twenty-first century, published by “The New York Times” presents a bleak future of humanity. The study was conducted for the United Nations (UN) by the Intergovernmental Panel on Climate Change (IPCC) and will be released until March, but until then it’s available for consultation to the governments.

The report contains extremely severe weather: if things do not change, this century will be marked by drought, armed conflict between countries and various groups and migration in search of better areas will be unprecedented.

The cities are most vulnerable.

The experts who have contributed to this report note that the ordinary areas of plants and animals will be exchanged with new ones to escape of rising temperatures. That will lead to overcrowding in some areas, and the disappearance of many species. But cities are most vulnerable. “Climate change will slow economic growth and poverty reduction will increase the inability to feed the population, and poverty will be increased especially in urban areas where can occur outbreaks of starvation”, says the IPCC report.

“Climate destabilization will increase poverty in lower middle income countries and generate bubbles of poverty in countries with above average or high income, increasing inequality between people.” Climate change will affect the infrastructure, from the road to the rail or sea. And if carbon dioxide emissions from burning fossil fuels will remain the same, experts point out that it will reach a dangerous combination between high temperatures and high levels of humidity.

War in time of famine.

“Climate Destabilization indirectly increases the risk of military conflicts as civil wars, violence between different groups or violent protests caused by poverty and economic shocks,” the report said. Experts estimate that agricultural production will decrease by 2% per decade until the end of this century. But at the same time demand will increase by 14% every decade, and world population will reach 9.6 billion people by 2050. If the report estimates will prove accurate, then the population of the world will have to allocate more land farming, but it means cutting of forests that will accelerate climate destabilization.

IPCC document shows that it’s not too late to reduce emissions of carbon dioxide and other greenhouse gases, but the effects will be seen only towards the end of the century or the beginning of the next century. In North America, the greatest dangers are wildfires, heat waves and floods. In Europe, South America and Africa, the problems will be with precipitations in quantities too large or too small, and the temperature above historical averages. Asia and South America are prone to starvation due to low food resources, and in Africa there is a risk of potentially lethal diseases in addition to other problems. In Australia and New Zealand may lose the reefs ecosystems and small islands will go below sea level.