Searches of the flight MH370 – which changed direction and communications deliberately disabled, after which “evaporated” eight days ago – Sunday focused on two broad areas. Police raided the homes of two pilots and  examines flight simulator that commander  have it at home.

Malaysian authorities announced Saturday that disabling communication systems and changing the trajectory to the Indian Ocean “correspond to one’s deliberate actions of the plane,” it continued to fly for almost seven hours. “Who? What for?” Wondered the Sunday edition of the Malaysian newspaper New Straits Times. These revelations have increased astonishment and media experts, and confusion relatives of the 239 people who were aboard, clinging in some cases, a tiny hope that the plane would have to land somewhere.

The family of Bob and Cathy Lawton, an Australian couple who was on board, it states devastated by imagining what could pass in the case of hijackings. “Even if they are alive, what had to endure?” Said David Lawton’s brother Bob, for media group News Limited. “We keep hopes and dreams. But really, do not know much,” he adds. The magnitude of the remaining questions in suspense is as high as search areas. 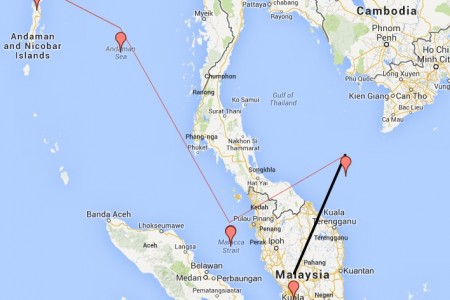 “Police searched Saturday pilot residence,” anounce the Ministry of Transport in a statement. “Officers spoke with the pilot family, and experts examined Flight Simulator” added the ministry. “Police searched the  copilot residence” is written in the press release, stating that it is a “normal” procedure.  Relatives and colleagues of the two pilots talking in the media about the professionalism and balanced character of Commander Ahmad Shah Zaharie, aged 53, and co Fariq Abdul Hamid, aged 27 years. Commander had at home flight simulator, but experts say that in the aviation sector is not so rare thing for some passionate pilots.

After abandoning operations in the South China Sea, planes and ships belonging to about ten countries focus on two corridors: north, from Kazakhstan and Thailand to the north and in the South of Indonesia to the South Indian Ocean. South corridor is considered susceptible by analysts, who points out that the northern crossing the airspace of several countries whose military radars had spotted the plane certainly. Malaysian Prime Minister Najib Razak declined Saturday to confirm a diversion. Investigators have “moved the investigation to crew and passengers,” he said.

An aviation expert, who requested anonymity, points out that “it is extremely easy to disconnect the transponder,” an automatically transceiver. “Disconnecting could be performed by the crew or a passenger who took three to four hours of piloting,” he says. Much more difficult is to turn off, instead, ACARS system, fitted to Boeing 777 and allowing the exchange of information between aircraft, in flight, and the airline’s operations center. According to the expert, “needs to have an excellent knowledge of the airplane.” Police raided Saturday homes of the two pilots, Commander Ahmad Shah Zaharie, aged 53, and Abdul Hamid Fariq copilot, aged 27 years, according to Malaysian media. Police refused to confirm this.

“It is necessary to think that we are still at the beginning of the investigation, though it was a week after takeoff,” notes Anthony Brickhouse , a member of the International Society of Air Safety Investigators. “We have no more clues: we have no airplane, we do not have wreck, do not have electronic data from plane,” he said. Satellite data collected do not allow to determine the place where the plane was after about eight hours of flight – an hour before the disappearance of the radar screens and after communication failures another almost seven hours. Fuel reserves allowed it to fly about eight hours. Flight MH370 has left the path halfway somewhere between Malaysia and Vietnam, an hour after it took off from Kuala Lumpur to Beijing destination, with 239 people on board. It was 1:30 am Saturday, March 8, the weather conditions were favorable and the Boeing 777, considered one of the safest in the world, has not sent any distress signal.