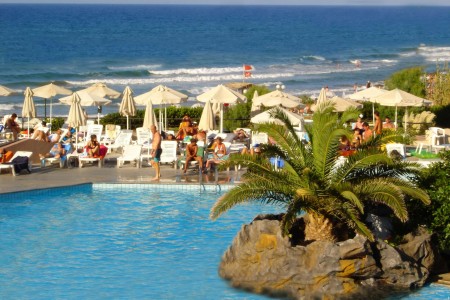 Name – Nisos Kriti (Crete Island) is one of the regions of Greece, the largest and southernmost part of Greek territory except islet of Gavdos. Crete has a length of 260 km and a maximum width of 56 km. The island covers 8260 km square. Crete, with its wild beaches and cliffs, is probably the most beautiful island of Greece and the fifth largest in Europe, she Aegean Sea separating Libya. Sandy beaches, washed by turquoise waters, elongated, different from the rest of Greece (a chain of mountains that divide into several provinces), and the vestiges of Minoan civilization which they testify the long history of this island are the most seeking destination in Greece.

It is a tourist paradise endowed with first class hotels, holiday villages and bungalows on the beachfront or near. If you arrive in Crete and hunger will hovers about worth to stop in a tavern where you can enjoy delicious, healthy natural Cretan traditional cuisine such as souvlaki (Greek kebab) zousotsakia (meatballs after a local recipe from Lefka Ori), Cretan moussaka (eggplants, potatoes, beef and seafood) or stifado (stew of lamb with aromatic herbs) – all cooked in the most pure olive oil. In Crete is found the best and most quality olive oil worldwide. Must be added that, the island of Zeus, is the largest producer of olive oil from Greece. Add these goodies, dozens of local types of cheese, made ​​unique recipes, numerous seafood types sprinkled with wine from local production and you’ll understand why Cretans, with the peoples of the Caucasus and residents of Hunza Valley and the island of Okinawa are part of human groups with the greatest longevity on the planet.