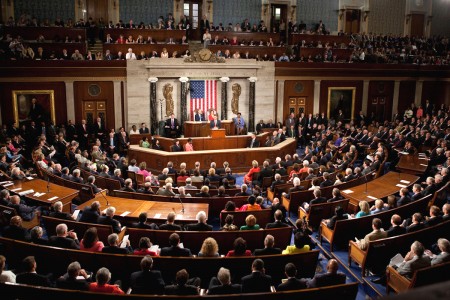 For the first time in two decades, the U.S. federal government will be partially closed from Tuesday after Republicans in Congress rejected two draft laws submitted by the House of Representatives. Once in “technically bankrupt” U.S. Government will be obliged to make payments of emergency only, but most state institutions will be closed, their salaries will be suspended and taxes are automatically increased.

Federal government of the United States of America will close partially due to political deadlock between Democrats and Republicans, parliamentarians failed to approve a draft law on the U.S. budget before the midnight deadline on Monday. Senate decision to initiate bankruptcy procedures it will take effect at 9:30 and Capitol Hill will suspend activity starting Tuesday, Reuters news agency notes. It is unclear How long will be U.S. blockade. Partial budget freeze will not affect some key areas such as national security. But cuts funding of most state institutions, affecting about 700,000 state employees.

Bankruptcy may be canceled as soon as is approved a draft law on the federal budget. There is no deadline imposed in case of technical bankruptcy. U.S. agencies have prepared plans for both the period of suspension of activities as well as when it will reopen, according to Reuters correspondents.

U.S. Senate rejected in the night of Monday to Tuesday two projects budget, exceeding the deadline at midnight, marking the end of the financial year 2013. Democratic senators were against the budget proposal as it affects the “Obamacare” – Medical legislative package proposed by President Barack Obama, although the same project financing would allow U.S. states since Tuesday. For ordinary Americans, this “fiscal cliff” means that taxes are increased automatically. Moreover, hundreds of thousands of civil servants are sent on unpaid leave and with no guarantee of future receipt of money, some state institutions will be closed, while others will work with a staff minimized.

But justice, national security, military operations and flight safety are among the services considered essential, which will be protected by the bankruptcy of the United States. American parliament approved a law guaranteeing Sunday Night wages for American soldiers in all conditions. This is a horror scenario for financial markets, which could thus enter a new collapse. “Technical bankruptcy” can have serious repercussions, and the U.S. government may enter into financial insolvency if it maintains its current maximum limit on the national debt (16.7 trillion dollars). A paralysis of the federal state would be a premiere since January 1996 to the present.