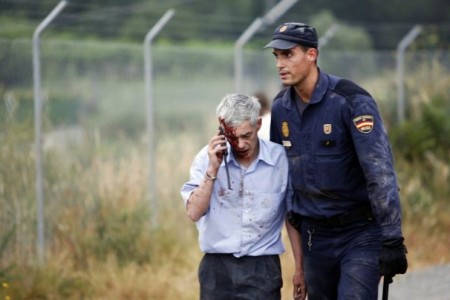 Driver of the train that derailed Wednesday in Santiago de Compostela, killing 79 people, was indicted Sunday for “79 acts of homicide by negligence” and set free under judicial control. Francisco José Garzon Amo, 52, is suspected not braked in time on the day of the accident, when the train was at a dangerous curve where the speed is limited to 80 km per hour. Questioned for nearly two hours by Judge Luis Alaez court in Santiago de Compostela, the train driver “was indicted for 79 offenses of manslaughter and a number of facts that have caused injuries, all committed by professional negligence,” according to “CNN News”.

Francisco José Garzon was instead allowed to leave after the judge found that there is no “risk of escape or destruction of evidence.” Instead, it will be present each week in court, will not leave Spanish territory for six months without judicial authorization and his train driver license was revoked for the same period, the court added. The train driver was questioned Thursday while was slightly wounded in hospital and placed in custody “for alleged acts of homicide by negligence”. He arrived Sunday at the courthouse in a police car, handcuffed. He is suspected of not being braked in time at entrance in a section where the permitted speed is limited from 220 to 80 km per hour. Precisely, in this place, in a dangerous turn accident occurred, 4 km away from Santiago de Compostela. According to a radio station links, even before the accident, Francisco José Garzon, a train conductor from 2000 and experienced train driver, admitted then that travel 190 km per hour instead of 80. Accident has resulted in 79 deaths. 70 injured were still hospitalized Monday, including 22 in serious condition.

He said he “does not understand” why could not brake in time to prevent the catastrophe that resulted in 79 deaths, according to an excerpt of the judge statements published by El Pais.

“Honestly, I tell you I do not know, I’m not so crazy to not be braked,” said Francisco José Garzon Amo during of his hearing by Judge Luis Alaez Sunday. “You activated brake at a time?” Asked immediately the judge. “When was already inevitable,” said the train driver, according to the excerpt. “Before the train to flip, I activated it, but I see no, no, do not go,” he adds. “I had no time for anything.” “I do not understand further,” he answered the judge who asked him why has not reduced speed train earlier.

The first information given Tuesday by “black boxes” of the train revealed that he went to 192 kilometers per hour, a few miles before the accident, after which he braked and derailed at a speed of 153 kilometers per hour in a turn where speed is limited to 80 km/h, at a distance of about four kilometers from Santiago de Compostela. Audio recording from black box also revealed that the train driver was on the phone at the time of the accident, with a Spanish railway company employee – Renfe – which he called “to tell the way it was supposed to follow the train reaching out to El Ferrol “his end of the line, after Santiago de Compostela, Galicia tribunal announced. At that time, “seem that the train driver see a plan or similar document paper,” said the tribunal. Francisco José Garzon Amo, an experienced railway, aged 52, was indicted for “79 facts of manslaughter” and released under judicial control.