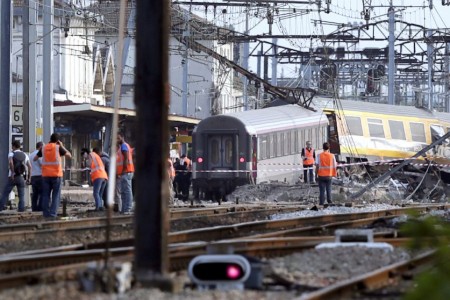 Railway accident product Friday afternoon near Paris, at Brétigny-sur-Orge, ended with six dead and 30 injured, according to the latest balance sheet of the French Prime Minister announced. Intercity train which left Paris a short time ago and went to Limoges derailed trying to avoid collision with another convoy of wagons.

Guillaume Pepy, head of the National Railway Company of France (SNCF), said the Intercity train derailed managing to avoid collision with another convoy of wagons moving. 3657 Corail Intercity train bound for Limoges, jumped off the rails Friday afternoon around 5:14 p.m. local time (18:14 GMT). On board the train was traveling 385 people.

French Minister of Transport, Frederic Cuvilier said that “normal trains run at a speed of 137 kilometers per hour” when the derailment occurred, the maximum limit on that section of 150 kilometers per hour. “The derailment took place at 200 meters before entering the station Brétigny-sur-Orge” Cuvilier added, quoted by the newspaper “Libération”. Three judicial and technical investigations have been opened to find out why the six wagons of the train derailed, said French President Francois Hollande, who has arrived at drama site on Friday evening. French officials described Friday’s rail accident as the worst rail disaster in 25 years.

The number of victims would have been much higher if the conductor train has derailed near Paris on Friday night would not have “extraordinary reflexes” prevent collisions with other trains, said today French Minister of Transport. “The train went off the rails, climbed to the platform and flew like a few seconds, then turned over,” says a witness.

Frederic Cuvillier, French Minister of Transport, said Saturday morning that authorities removed human error hypothesis for railway accident in which six people died and another 200 were injured after a train has derailed in the village Bretygny-sur-Orge , located in a suburb south of Paris.

“The train arrived at the station at high speed. It was divided in two, for a reason unknown. Part of the train continued to run, while the other side was laid on one side, on the platform, “said a police source. Train ensure links between Paris and Limoges (center), according to police sources.