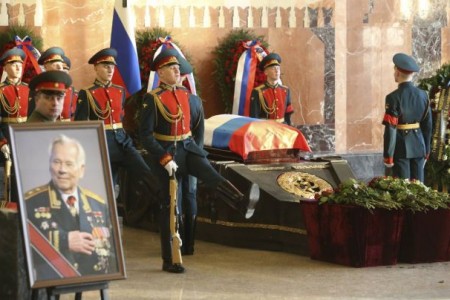 Russia brings today a final tribute to Mikhail Timofeyevich Kalashnikov, inventor of the legendary Soviet assault rifles AK-47, who died Monday at age 94, to be buried with state honors in a recent military memorial inaugurated near Moscow.

Coffin’s most famous inventor of Russian weapons, covered with Russian flag and surrounded by garlands of roses and carnations, was deposited in a huge room in the complex, which opened in June, and the honor guard were installed in the post, according to a photographer AFP. “Mikhail Timofeyevich Kalashnikov‘s funeral will be held according to state protocol that requires the participation of government representatives at the highest rank, of escorts and orchestra,” said cemetery administration, quoted by Interfax.

Russian President Vladimir Putin and other important guests were expected at the ceremony, which was to start at 9:00 GMT in complex military memorial at Mîtişci near Moscow, designed as an illustrious pantheon for the Russian military. Russian Defense Minister Sergei Shoigu and the head of the presidential administration Sergei Ivanov have been among those who came to pay a last tribute to Kalashnikov, in this vast complex, which occupies 53 hectares, consisting of a cemetery and a military museum. 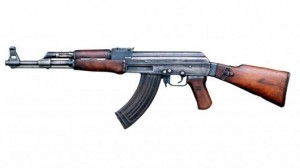 It is a unique memorial cemetery in the world (…), which will rest the best our compatriots. Mikhail Timofeyevich Kalashnikov will be the first of them, “said Deputy Minister of Defence before the ceremony, Nikolai Pankov, quoted the public agency RIA Novosti. For now, only the body of an unknown soldier who died in World War II, was buried in this place emblematic of the Russian military. Three bursts of assault rifles AK-47 would be held in honor of Kalashnikov, according to the Ministry of Defence. Mikhail Kalashnikov died Monday after a long illness at the age of 94 years, at Izhevsk, the Udmurtiei (Ural) capital, about 1,300 kilometers east of Moscow, where is weapons manufacturing company that bears his name.

Kalashnikov’s coffin was transported to Moscow Thursday after about 60,000 people came to pay tribute to Izhevsk. Kalashnikov has repeatedly stated that he is proud of weapon designed it in 1947, promoting, the simplicity. AK-47 rifle had been sold, according to some estimates, about 100 million copies. Mikhail Timofeyevich Kalashnikov has never received any money from the sale of the rifle that bears his name, used by armies in over 80 countries.