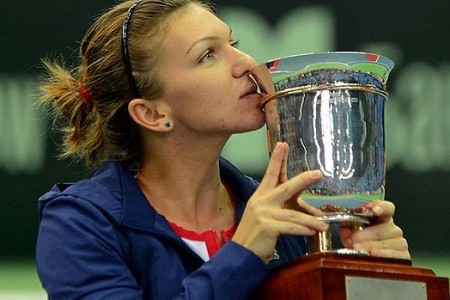 Romanian nationality tennis player, favorite no. 5, Simona Halep defeated Samantha Stosur in the final 2-0 (7-61, 6-2) thus entering among the best 15 players in the world WTA. Season 2013 is on the final and Simona Halep squeeze the last drops of nectar from it. After four trophies, entering the Top 20 WTA, after reaching the eight-finals at U.S. Open, won the grand final in Moscow having as adversary Samantha Stosur, after passed by Anastasia Pavlyuchenkova in the semifinals (6-2, 6-1). In the quarterfinals defeated Alisa Kleybanova (6-1, 6-1) and the Russian tennis player (254 tennis player in the world) received a wild card from the organizers, she just being at the seventh tournament of the year after in March 2011 was diagnosed with Hodgkin lymphoma. After nine months of treatment, she said it has overcome the disease and tried to come back on the tennis court in 2012, in the tournament of Miami, but it was too early for the body. This year she played more and reaching quarterfinals in Moscow is the best result of or after recovery.
Simona Halep, seeded no. 5 not kept Kleibanova too much on court, only 72 minutes that has won the game. So qualified in tenth career semifinal, among the nine so far, losing only two in Fes in 2012 and in Rome in 2013. In Moscow she managed to win against Anastasia Pavliucenkova (No. 30 WTA) which has met twice so far and each time defeated.