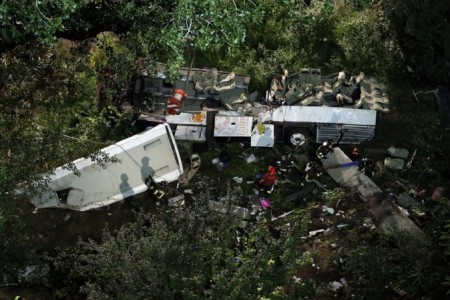 39 people died and at least 10 were injured Sunday in a bus accident near Avellino, in the region of Naples. And children are among the victims. The vehicle fell into the void 30 meters from a road bridge.

The bus that was going with high speed, hit several cars – an AFP journalist counted seven or eight cars recessed into each other – and then made ​​a genuine flying over a road bridge has fallen 30 meters. Several passengers were thrown from the vehicle. Bus driver is among the victims and among the wounded are more children, writes the Italian media. The approximately 50 passengers on the bus, all natives of the province of Naples, were returning from a pilgrimage in Pietrelcina, hometown of Padre Pio, an Italian priest canonized in 2002 and highly revered in southern Italy, and headed toward Naples. According to eyewitnesses, the bus may have had problems braking. Local journalists evoke further assumptions, including that the driver had fallen asleep behind the wheel or that it blew a tire. “The situation is critical,” said one of the firefighters to Italian television. “We’re trying to save many lives,” he added.

According to Italian media, where the tragedy happened downward passage is particularly dangerous. Several serious accidents have occurred there in the past. Those injured were taken to hospital, but the balance accident could become even more tragic. The bus – a big bus tour – arrived in the lower speed portion, near Avellino, about 50 miles east of Naples, despite numerous signaling panels speed limit and struck the vehicle in front of him, causing a giant collision. Then the actual vehicle flew off a road bridge has fallen 30 meters. Several passengers were thrown from the vehicle. A survivor, quoted by her uncle who met her for a short time in a hospital, says that one of the tires blew and the bus driver failed to maintain control of the vehicle.

Prosecution of Avellino in southern Italy, opened an investigation Monday for “manslaughter” after the accident which involved a bus carrying Sunday evening pilgrims, after which 38 people died, writes Italian press reports AFP. According to the agency Ansa, the investigation will cover not only the possible responsibility of the bus driver, died in the accident, but the vehicle’s condition and quality of bumper torn by bus during its mad race. Traffic police has already raised vehicle documents from headquarters Mondotravel transport, which belonged bus. Parallel examinations will be conducted on the driver’s body in order to verify a possible drug consumption or alcohol prior to the terrible accident.