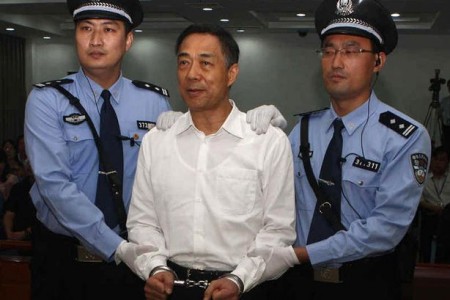 Former communist leader Bo Xilai, sentenced to life imprisonment on Sunday 22 speptembrie 2013, was announced judicial court on Monday, September 23, 2013 of his intention to “appeals”, being unsatisfied in the “verdict totally”, according to a source close to the case, cited by several news agencies.

“He has already filed a complaint in the Court of Jinan”, the capital of Shandong province, where the process took place, said the source. Acceptance of the request of Bo Xilai, testimony to his desire not to comply with the court decision, remained to be approved or not in the future. However, according to “Chinese law terms, the court shall record request” following his submission vivat voice. Former “Red Prince” of Chinese politics was convicted after a huge political scandal considered the most important of the end of the Cultural Revolution.

Verdict handed down foresee prison to Bo Xilai for corruption, embezzlement and abuse of power, especially for the assassination done by his wife Gu Kailai, on the British businessman Neil Heywood. Appeals are rare in China, one reason being that the courts generally impose penalties tougher in the second instance. Among past political figures tried and sentenced is the former Shanghai Mayor Chen Liangyu, politician who gave up appeal on his conviction to 18 years in prison for corruption in 2008. A brand politician, mayor of Beijing, Cheng Xitong, sentenced to 15 years for corruption in 1998, was one of the political leaders whom the appeal was rejected.

A Chinese court rejected the appeal of former communist leader Bo Xilai, who challenged life imprisonment. Called ‘Red Prince’ Xilai was convicted of high-level corruption being one of the culprits punished by the Chinese authorities involved in a broad anti-corruption campaign.

Former member of the Executive Committee of the Communist Party (Politburo) declined from power after a scandal exploited by Chinese media, revealing stories about suspicions of murder and deceit in the highest levels of the political scene. Police escorted the condemned from the court to prison where he is detained. “Higher People’s Court of Shandong (province where Bo Xilai was tried, Ed.), On the morning of October 25, rejected the appeal and upheld the verdict of life imprisonment for corruption, embezzlement and abuse of Bo Xilai’s power”, said New China on Weibo, the Chinese equivalent of Twitter network.

Magistrates decision was not a surprise, as a result of political analysts predicted. They said Xilai ‘s fate was decided before the Communist leaders , determined to keep him away from politics enough that they can not return. Judges said Xilai deeds “led to very serious social consequences and caused great harm interest of the country and the party “, reads the posting on Weibo . Former “Red Prince” of Chinese politics was sentenced on September 22 after a huge political scandal considered the most important of the end of the Cultural Revolution. Provide prison verdict Bo Xilai for corruption, embezzlement and abuse of power, especially of the assassination done by his wife Gu Kailai , on the British businessman Neil Heywood.