Instead of serving the most important meal of the day – breakfast – women prefer to put on makeup and arrange their hair.  According to a survey, the ladies avoid eating in the morning also because they are considering themselves too plump and breakfast, in their view, contribute to the accumulation of weight. 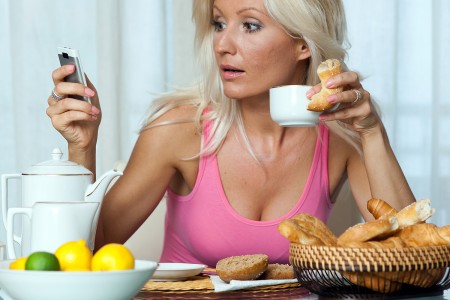 The survey was conducted online with a sample of 2,000 people over a period of six days, and finally found that the most important meal of the day is ignored by one of three women because time allotted to beauty is more important. Among the priorities of women are arranging the hair in the morning, followed by body care and choice of clothing for the day. But this is not all, one of six women did not have breakfast in the desire to lose weight.

However, one in four women said that she does not have time to eat because is sleeping more.

Two in five women admit that they are hungry in the middle of the morning, 29% said that they feel tired and without energy, and 15% of women have trouble concentrating. Abdominal pain, but other effects are felt by almost half of women who skip breakfast.

In contrast, for men, breakfast occupies an important place on the list of priorities being the second thing they do in the morning.

Also, a study made  last year  by American researchers showed that people who skip breakfast have an increased risk of suffering a heart attack. The study showed that older people who do not  eat in the morning are more likely to suffer a heart attack or die from coronary heart disease compared to those who eat in the morning. It was also found that the lack of breakfast and meals too late can cause metabolic changes that lead to coronary artery disease.

What is your opinion? Helps breakfast? Do not hesitate to leave us a comment!