Tennis match in Rome between Novak Djokovic and Rafael Nadal began quite tight. With overcrowded arena, the first of the players who served was Djokovic who won the game at 30. Followed Nadal’s turn to serve and has won game two at 40. Spaniard Nadal then used his skills on clay, and he managed to win three games in a row. While it was believed that the first set will be won by Rafael Nadal, Novak Djokovic tries to comeback and win the games 6 and 7, 40-0 lead in the eight game, but unfortunately Nadal shows us again why is no. one in the world. The Spaniard won with the score 6-4 in the first set. 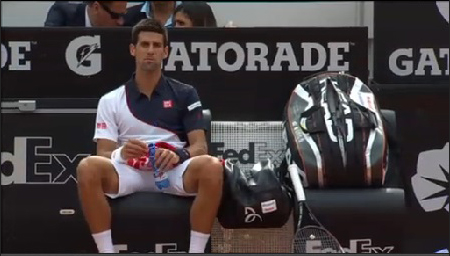 First who win the break in set 2 is N. Djokovic, who takes the lead, 3-0. Nadal is trying to recover, manages to win on the opponent’s service game but locks on their service and Serbian take advantage, make rebreak, and the score is 4-2 to Djokovic. Rafael Nadal tries to return to the set, even when it led 5-3 but fails and his opponent wins set 2 with a score of 6-3.

In set 3 Novak Djokovic begins to a break at 15 on Nadal’s service, and win on their own service at 0. And tennis match in Rome is moving toward victory of number two worldwide. But Spaniard do not give up, make rebreak  and the score is 3-3. And here begins emotions …. for Nadal, who fails to maintain the level of Djokovic, which rebreak, win on their own service and lead 5-3 in set 3. Following the last service of Nadal that Serbian Djokovic wins at 30 and thus the 19 win against Rafael Nadal and a new championship title in Rome.

Tennis match in Rome is the 40th meeting between the two. Way of those 2 to the final, it was quite difficult for the two tennis players, given that both R. Nadal and N. Djokovic have “learned” us so far with simple victories, without much suspense. 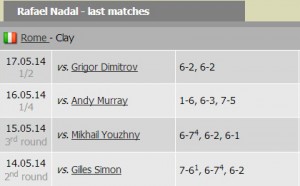 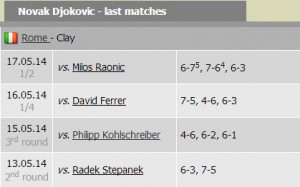 The doubles of The Internazionali BNL d’Italia was won by the team made up of Daniel Nestor and Nenad Zimonjic against Robin Haase and Feliciano Lopez (the latter being the first doubles tournament together). Winners come after another victory, in Spain, in Madrid where in the Final they managed to win against Bob Bryan and Mike Bryan 6-4, 6-2.