She was chosen to replace Gisele Bundchen for being the image of H & M in the international campaign that will promote spring – summer collection of Swedish brand. 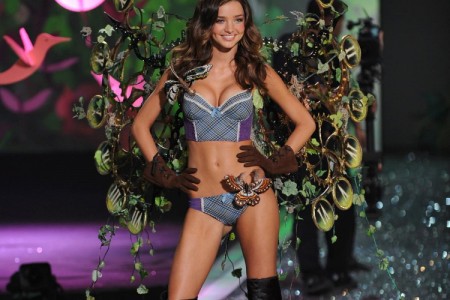 The choice of Miranda Kerr for promotional campaign coincides with the Swedish retailer’s expansion in Australia and the Philippines. One of the largest H & M stores will be open Melbourne.

By replacing Gisele Bundchen, Miranda Kerr is likely to pass first in the top of the highest paid models, composed by Forbes magazine, which Bundchen dominated the past seven years.

In the top of Forbes magazine in 2013, Gisele Bundchen appears first, with earnings of $ 27 million between June 2012 and June 2013, while Miranda Kerr ranks second with earnings of 4.46 million dollars, the same period.

Miranda Kerr has recently ended a contract with rival brand, Mango, and now is the image of Swarovski Jewelry House and owns his own company of skin care products, Kora Organics.

Miranda Kerr, aged 30, is one of the best paid top models of the moment and was, until recently, one of the “angels” House Victoria’s Secret.

Top Australian model has been married three years with British actor Orlando Bloom, and they divorced in October last year. From this marriage resulted  a baby boy, Flynn, born in January 2011. After break she began a relationship with Australian businessman James Packer, at the end of last year, considered one of the richest Earthmen, whose wealth amounts to six billion dollars. He also owns a chain of casinos.

Billionaire recognized to all the friends he started a relationship with Miranda, but it seems they were not shocked by the news. Moreover, James and ex-wife were close to couple Kerr-Bloom, and last two years was on vacation all four at a luxurious resort in Tahiti.

Peak of the destiny Erica Baxter (ex-wife of James ) and Miranda have grown together in the Australian town of Gunnedah.