Accused of cheating by ex-husband, Martina Hingis returned after six years, on her first love: tennis.

At the age of 32, swiss Martina Hingis won with slovakian Daniela Hantuchova in the first round of the tennis tournament in Carlsbad. She returned to the WTA circuit six years after testing positive (cocaine) at Wimbledon. 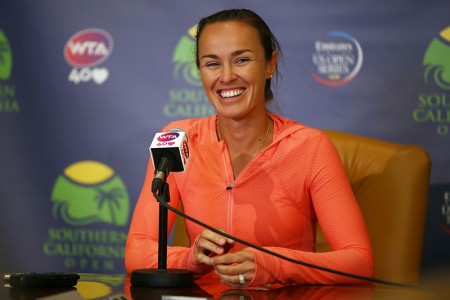 After more than a decade, while dominating tennis, Martina Hingis bluntly stated: “I will never put sports above personal life!” And so it has happened. In 2003 when she was only 22 years, the one nicknamed “Miss Switzerland” has withdrawn due to injury. He returned in 2006 to once again say “Stop”! a year later. Then, left the competition, after being diagnosed positive with cocaine, at Wimbledon.

She loved athletes from three disciplines.

Suspended for two years, Hingis then kept page 1 of tabloids with his romances. She was girlfriend of golfer player Sergio Garcia, then fiancee oftennis player Radek Stepanek, because in December 2010 to marry Thibault Hutin, member of riding contests. And broke it, and frenchman accused last month that was not faithful: “I think has cheated all of boyfriends!”

Included in the Hall of Fame a month ago, Martina Hingis won yesterday in the first round of the doubles at Carlsbad, with Daniela Hantuchova: 6-1, 6-1 vs. Julia Gorges and Darija Jurak.

However Martina Hingis remains the youngest world leader in tennis history at women. She was 16 years, 6 months and one day in 1997, when she became number 1.

Was asked at the press conference after the game if it will go back and play singles in world tennis to which Martina Hingis responded very clearly and convincingly that it would be more difficult to return to single and that at this time certainly will not return.