All TV stations, websites and newspapers in the world are talking about this virus that seems to be spreading in a faster way than expected doctors and specialists. Ebola virus is still doing victims , but the antidote or any other kind of treatment delays to occur. Now the virus is in Europe.

It seems that the threshold of 4,000 deaths from Ebola virus has been exceeded, according to the latest assessment of the World Health Organization (WHO), released Friday in Geneva. According to this review, completed on 8 October, there were 8,399 total cases of disease in seven countries, including 4,033 deaths. Balance includes the incredible number of 2,316 deads in Liberia, Sierra Leone 930, 778 in Guinea, 8 in Nigeria and one  in the United States. 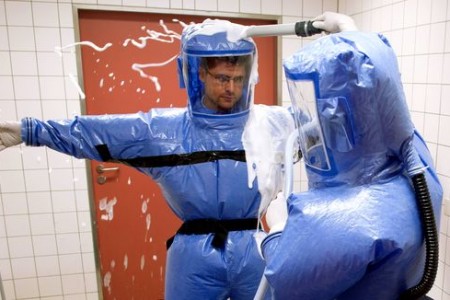 Thursday, Britain announced the introduction of a special screening in some airports and train stations for travelers from countries affected by the epidemic of Ebola. Improved screening system will be implemented initially on Heathrow and Gatwick airports and on the Eurostar terminal for people coming from Liberia, Sierra Leone and Guinea.

However, the World Health Organization announced that the appearance of isolated cases of Ebola hemorrhagic fever are “inevitable” in Europe, but the risk of spread of the epidemic is “extremely low”.

To prevent Ebola infection must be aware of the signals our bodies transmits. Therefore, high temperature, headache and sore throat are the first signs that Ebola virus enters into the body, attacking the immune system cells while leaving the impression that it is an ordinary cold. As the disease progresses, victims’ eyes turn red because small blood vessels burst, causing bleeding from the eyes, ears, mouth and other orifices. The virus destroys the same as those targeted cells by HIV, Ebola infection is even more aggressive by removing the cells from the immune system under formation.