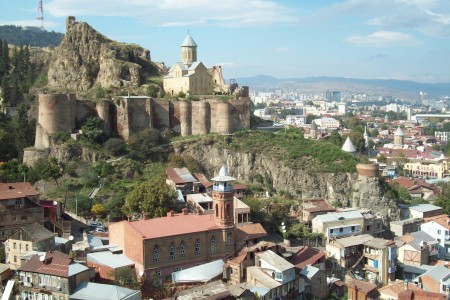 On the map, Georgia is part of Europe. But reality is another. Having borders with Russia, Azerbaijan, Armenia and Turkey, this country is a mixture of European and Asian cultures. So it is that, stepping on the streets of Tbilisi, can meet for in a few minutes walking distance an Orthodox church, a Catholic, another Armenian, all adjacent to a synagogue and a mosque.

Georgia’s capital is neither a European city, but none Asian is where east and west were mixed to give a special charm.

The city was founded in the 5th century and attracts every year a large number of visitors who come here for the springs of thermal water from which it came the name of “tbili” means warm in gruzina, lively atmosphere for the cobblestone streets, for old buildings or simply, what he was saying Alexandre Dumas: “a strange city with a fascinating charm, a city of legend and romance, where if you spend a few days you start to feel so strongly that you think you can move mountains. “

Tbilisi has nearly 1.5 million, approximately one-third of Georgia’s population lives here! It is surrounded by mountains on three sides and is divided into two by the river Kura, making him look like a capital of Western Europe such as Paris, London and Budapest. However, walking the streets of Old Town, you wake up surrounded by buildings of Byzantine architecture, Soviet, European, and the medieval buildings that have resisted attacks over the years.

It’s important to know, Tbilisi, in history, has been rebuilt 29 times! Even so, has managed to retain the charm, that make it especially, stone houses with wooden balconies and inner courtyards. Rustaveli Avenue is the heart of the city, where you find a lot of cafes, terraces and shops. 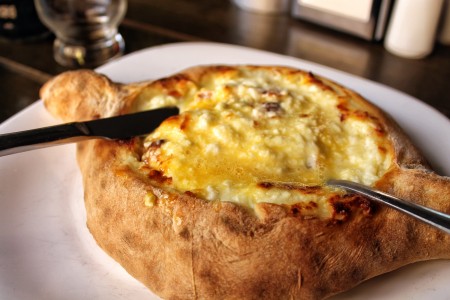 Street trading is widespread in the streets of Tbilisi. From place to place you can find a flea market sellers or grocery store strolling. Not missing street corner restaurants, where you can enjoy the famous cheesecake “Khachapuri” (photo left) or deserts “gozinaki” and “churchkhela”.

There is evidence that the wine originated in Georgia. The way to produce this drink is the most important Georgian tradition. They use large clay pots buried in the ground, where the wine is kept until it reaches the unique flavor and special characteristic of Georgian wine.

An old local legend says: “When God divided the earth to all people, gruzins were missing because they made ​​a banquet with toasts and large amounts of wine. They came later, and God said that nothing is left for them. Georgians have explained the delay, were missing that raised the glass to honor him. So God was pleased and gave the land on which he had kept for him. 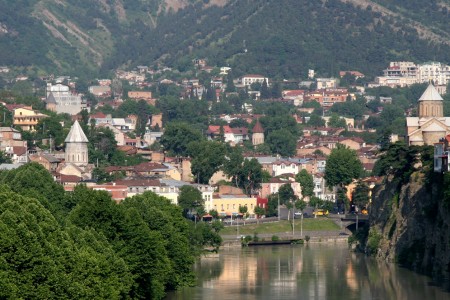 At 76 kilometers from Tbilisi, in Gori, was born in 1878 Joseph Stalin, real name Ioseb Djugasvili. Who was to become one of the world’s greatest dictators studied even in Tbilisi, where he reached at 16 years old to attend the Theological Seminary.

In Tbilisi there is a football team, Dinamo Tbilisi. Thus it plays matches in a stadium built in 1937, but has suffered several modernizations over time, the last in 2006. Currently it can accommodate 54,600 spectators, all seats being covered.