U.S. President Barack Obama announced on Friday evening during a televised intervention that was on the phone with his Iranian counterpart, Hassan Rohani, an unprecedented contact between the U.S. and Iran after the Islamic revolution in 1979.

During the conversation, the leader of the White House made ​​known to his interlocutor that he wanted a “global” solution with Tehran that started Thursday a series of contacts with Western powers to discuss its nuclear program.

Iranian President Hassan Rohani, is the one who on Friday, did notice of their wish to discuss with his U.S. counterpart, Barack Obama, before leaving the United States, said a high ranking U.S. official after the call history of the two leaders. 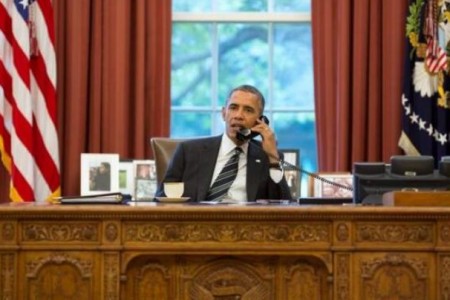 “We discussed our ongoing efforts to reach an agreement on the nuclear program,” said Barack Obama, quoted by “Huffington Post”. “I told President Rouhani what I said in New York: though will ​​face obstacles, and success is not guaranteed, I think we can reach a comprehensive solution.”

“Solving this problem could be a big step towards the formation of a new relationship between the U.S. and the Islamic Republic of Iran, a link based on mutual interest and respect,” he continued.

For his part, Iranian President Hassan Rouan posted on his Twitter page details about Obama conversation.

An Obama administration official told reporters on Friday that the phone call was initiated by team Rouhani and Iranian President expressed his desire to speak with Barack Obama before leaving by plane back to Tehran. 15 minute conversation took place at around 2:30 p.m., according to the same official. Although Rouhani speaks fluent English, the two leaders conversed through an interpreter, common action among high level diplomats. The White House unveiled a photo of Barack Obama while talking on the phone with Rouhani.