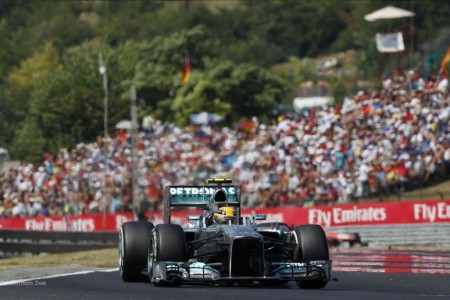 Lewis Hamilton succeeded his first win for Mercedes right on Hungaroring circuit favorite for the British because won three times here with McLaren.

He came in the summer at Mercedes instead of Michael Schumacher, accepting the offer of Ross Brawn Manager. Accustomed to victories at McLaren, Hamilton waited 10 races to win one too. Until the Hungaroring, the biggest slice of cake went to Vettel (four times), Alonso and Rosberg’s (twice) and once Raikkonen. He tried several times the victory. He managed 3 times the pole position (China, UK, Germany) and three podiums, all on its last position. Happened in Malaysia, China and Canada. Very little for a former world champion, especially that Nico Rosberg, his team mate has already ticked two wins. At the Hungaroring, Lewis got a new pole position and the chances Briton to win the Grad Prix of Hungary became very high, considering on the Hungarian circuit overtaking is very difficult. Moreover, the Hungaroring provokes memories of Hamilton because the current pilot of Mercedes already raised three victories here in 2007, 2009 and 2012 all for McLaren. 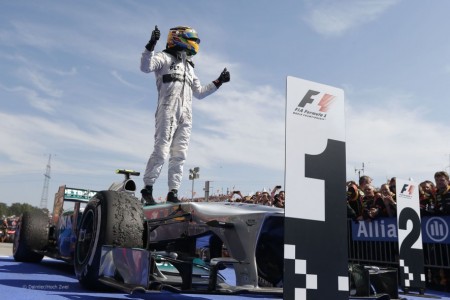 Overtaking as a world champion.

Hamilton dominated and was a clear success. He went well to the grid, maintaining its position ahead of Vettel and Grosjean. Even when he lost the first position after a tire change, Briton reaching out behind Webber, who was busy with a tour-delayed – Halkenberg, Hamilton risked because not losing valuable time. He attacked decisive in a right turn and get rid of them. The third and final pit stop Vettel’s actually brought the first position of Hamilton, and he never gave it until the end. Interesting was the battle for second place. Vettel on lap 67 caught in Finnish, but Kimi did not left spaces for current World Champion. 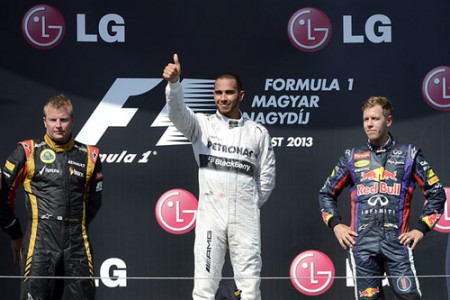 Formula 1 go on vacation for a month.

Pleasant surprise at the Hungaroring represented Frenchman Romain Grosjean (Lotus). It was always there, near Hamilton, Vettel and Räikkönen, and would have a good chance to catch the podium if it was not a drive-through penalty on lap 37 after an incident with Massa. Questionable decision commissioners of the race. So, the Frenchman was forced to settle for 6th position. In front of him were ranked Webber (4th) and Alonso (No. 5). Little to Spaniard of Ferrari, which had to give second place in the drivers’ standings to Kimi Räikkönen. In the next period is summer vacation in Formula 1. Four weeks will have available those at Maranello to make Alonso a competitive monopost, or the Italians will look with sadness as Vettel and Räikkönen, Hamilton has a chance even now, to win another world title.