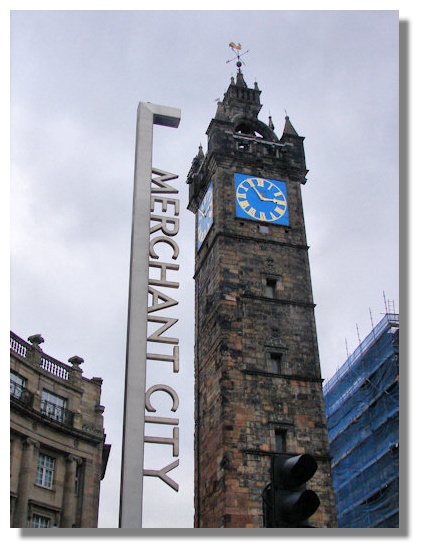 Although London is the first attraction of the tourists who visiting UK, Glasgow city pulsating vibration that is not found in England. Scots are fiercely proud and friendly.

For most of us, Glasgow City equivalent to football – means the rivalry between Rangers FC and Celtic FC teams – is synonymous with the place of birth of the legendary Sir Alex Ferguson or, at most, with a kilt, but the city sitting on the banks of the River Clyde impresses primarily by people jovial by avant-garde spirit and Victorian architecture.

With a sky almost always frowning, Glasgow is not too fascinating destination, but passion abound in the streets of the fourth largest city in the United Kingdom. Although it has a population of nearly two million people, counting and its suburbs, Glasgow is Scotland’s capital, but the most important city of the country and one of the major industrial and economic centers in the UK. It’s hard to decipher the city if you do not really penetrate it. You can be deceived by the light launched into the film “Trainspotting” by Danny Boyle based on the novel of the same name by Irvine Welsh. Although action of the movie is set in Edinburgh, much of the scenes were filmed on the streets of Glasgow in a tobacco factory in the city. Image left behind is an industrial city, a town common in places, fallen into a deep economic crisis. Although the ’96 film shows some realities still present in Glasgow (rather in the east), the city breathes a different air in 2013. 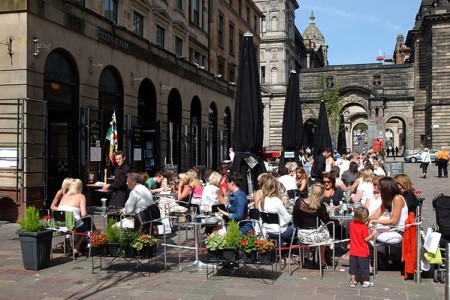 History tells us that the city’s development was favored by its geographical position on the west coast of Scotland, which turned into the main point for trade. Besides imports of cotton and rum, Glasgow has become a kind of tobacco country, so that in the nineteenth century, “tobacco lords” have contributed significantly to the rise in living standards in the city and the construction of many Victorian buildings. Architectural landscape began of Alexander “Greek” Thompson in the nineteenth century was complemented by modern design through the work of Charles Rennie Mackintosh, who imposed architecture art nouveau, and the father of Glasgow School of Art. If you ask a Scotsman why country is famous, the answer will certainly include shipbuilding. “Built on the Clyde” has become a famous expression in the UK and means a sure thing and well done, as were steamboats of the United Kingdom. INDUSTRIAL Glasgow today feels like a city that has reinvented itself, who knew how to keep the good parts of the past, learn spicy diversity of modernism and let them polish heart or “the toon” as the locals call in their dialect. Beyond the commercial shops in City Centre, the favorite area of tourists, which meet at each step Victorian and Edwardian buildings, there is also the Merchant City – medieval heart of the city.

Many of the streets in the center of “Old Glasgow” was named after “tobacco lords”. Perfectly preserved and peppered with historical buildings, the district is dominated by the Tolbooth, hexagonal building, and the Clock Tower – the remains of the original City Chambers, which was destroyed by fire in 1926. Heart of the city lies and “under the sight” of Glasgow Cathedral, built in the Gothic style in the Middle Ages. On the hill behind the cathedral lies “dead city” as the Victorians called Necropolis cemetery where over 50,000 people are buried. Back in George Square, is bustle, the area is pedestrian only from time to time, passing by a bicyclist. On foot you get in Royal Exchange Square, Scottish horsetail, featuring Goma – Gallery of Modern Art – a neoclassical building which houses works by national and international artists.

But perhaps the most interesting part is found in front of museum: the equestrian statue of the Duke of Wellington, whose head sits on a cone signaling traffic. Despite the efforts of the authorities to remove the cone, Scots put it back each time, so this habit has become, over time, a symbol of the city. Merchant City is a place that wanted to be a mirror of Scottish Covent Garden market in west London. Tourists can find here the famous brands, pubs and restaurants up to art that is going on in the streets, galleries and cultural and artistic programs. In September, tens of thousands of visitors come to the Merchant City Festival. The central area can be easily crossed on foot, more difficult part appears as you climb hills to exit the center and enter the bustling lyric of the city – West End. 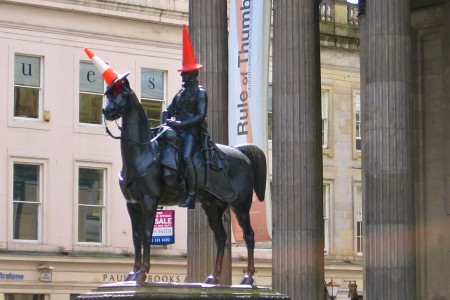 The road will take you to one of the inevitable stately buildings in Scotland – University of Glasgow, a place of learning built in Gothic style, which makes you think that you graduated college building and let the head down, ashamed. Founded in 1451, the prestigious university is the fourth oldest in the UK and is considered one of the leading academic institutions in the UK. At 21.00, in July, when the sun is still in the sky, around the university “can be heard quiet.” Students are on vacation, and those remaining are preparing to go out in pubs. The streets are wide and airy, more homes are surrounded by green, flowering trees, the picture looks more like a slide. Descending along Kelvin Way, towards Kelvingrove Park, to reach the largest art museum in Scotland – Kelvingrove Museum and Art Gallery where can be seen and works signed by Salvador Dali. The area abounds in museums, art galleries, cafes and bohemian architecture that force you to stop in the street to do another photo.

Ashton Lane is a hot spot for both students and tourists. It is actually a narrow street with cobblestones, with pubs, restaurants and terraces, which begins suddenly and ends the same shortly. At both entrances one Busker – street musician – will strum a guitar.