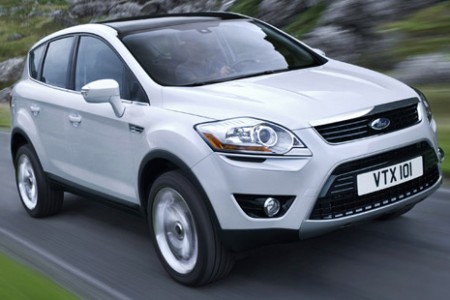 Although at European level Ford was present in the compact SUV segment since the early 2000s, through Maverick model (developed in cooperation with Mazda), we can say that only with the advent of Kuga manufacturer offered a fierce competitor in this class. The first generation model sold from 2008 to the present more than 300,000 units. The new model, which debuted this year on domestic markets, takes the concept to a higher level, being a global car, the symbol of philosophy “One Ford” platform and design are developed in Germany (Cologne) powerplant in the UK (Dagenham and Dunton), the interior and body elements in the U.S. (Detroit). Moreover, the production is in the U.S., Spain and China.

First Kuga was appreciated for its design which was part of Ford’s new stylistic language, “Kinect Design”. The new model refines the well-known lines, displaying a bodywork which, although no longer appears equally original as in 2008, has a more dynamic look.

This is due both exterior dimensions (length increased by over eight inches, while the height decreased slightly) and redrawing the defining elements – headlights are substantially elongate, grille is impressive etc. Inside, the dashboard is completely new, offering a resort style, very pointed shapes. The center console is finished in a glossy black plastic “piano black” and a multitude of commands grouped in the first instance, may embarrass a driver unaccustomed to ergonomics specific to Ford. Things are logical but after a short period of adjustment.

The seats are well shaped aerodynamic and ample adjustment possibilities provides optimal driving position. The wheelbase has remained unchanged, but is now a more spacious interior, including rear passengers who benefit of better access. Seat bench can be adjusted in several levels of tilt and can be folded completely in a single maneuver. Including trunk volume increased, which recommends Kuga as a solution worthy of consideration for a young family. Suspension inherits dynamic characteristics of the former generation, which still make the Kuga one of the most dynamic segment models. Comfort is not penalized unless rapid running on damaged surfaces. Despite the appearance of SUV Kuga feels best on the road and not beyond. 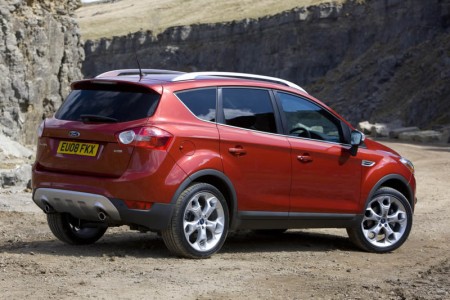 If necessary, however, the ground clearance of 193 mm allows careful approach of unpaved areas. Ford brings a new drive system that replaces the old scheme based on Haldex differential. The tested model was equipped with the diesel engine of 2.0 liters and 163 hp, coupled to a six-speed manual transmission. The engine develops sufficient resources from the 1,500 rpm, which provides a compelling agility of the car not exactly easy. Gear ratios is good, which positively influence fuel consumption. In addition, due to a revised soundproofing, new Kuga is quieter than its predecessor.