Europe continues its dominance in the Ryder Cup, a competition they face every two years the United States team.

At Gleneagles, Scotland, the home team began the final day with a lead of four points, score 10-6. But the day schedule 12 games, so the Americans had chances to score back.

Two years after  spectacular returning of Europe Golf Team, when it was headed by 6:10 before the last day – like the USA in Gleneagles, this time – “Miracle from Medinah” has not recurred. Europeans, especially Justin Rose (England, four points from five matches), Henrik Stenson (Sweden, three out of four), rookie Victor Dubuisson (France, 2.5 in three) and Graeme McDowell (Northern Ireland, three of three) – foreground players brought foreground team performance – could not be defeated in singles matches Sunday. Europe won the most prestigious golf trophy in eight of the last ten meetings. U.S. Open champion, Martin Kaymer, contributed to the success of Europe Golf Team by two points from four matches. 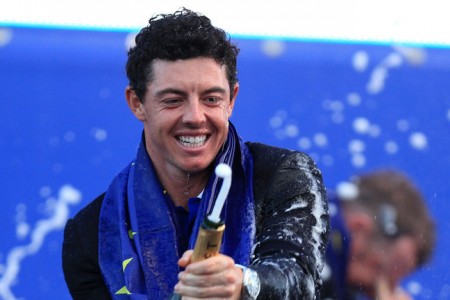 Two Northern Ireland, world leader Rory McIlroy and Graeme McDowell have achieved victories in the first two games, and Europe was leading by a score of 12-6. Americans have won three of four games and seventh match between Hunter Mahan and Justin Rose, ended in a draw. With five games before  final, Europe had four points ahead, so has to win a single match of the following to keep the trophy.

The Ryder Cup rookie, Welshman Jamie Donaldson, has imposed in the eighth game, in front of Keegan Bradley. Donaldson was always in front and had a great approach shot to the cup 15, sending the ball just two feet from the cup. Bradley looked to the American captain, Tom Watson, who said with already known dignity :”Quit. They won.” Donaldson won all three matches that has evolved over the weekend.

There have been played the other four matches remaining, only to track recordand every team winning one each and two ending in a draw. The final score of the meeting in Gleneagles was 16.5 to 11.5 for Europe.

Europe won the competition for the tenth time in 18 seasons they played, since 1979, before the United States team facing Great Britain team.

BMW has been engaged for the second time in 2014 as an official partner and has been eight years as a staunch supporter of this unique intercontinental show. BMW has global rights (excluding North America and Canada) as an official partner for 2014 and 2018 editions of Ryder Golf Cup. When USA will host the Ryder Cup in 2016, BMW will once again be involved, but as a partner of Europe Team.

The next edition in 2016, will be played on American soil, on club Hazeltine field in Chaska, Minnesota.