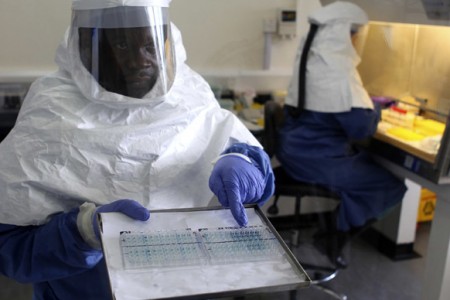 A British citizen living in Sierra Leone has been tested positive with Ebola virus, the Health Department announced on Saturday in London, informs AFP. Responsible of the Department said that the patient infected with Ebola, who was not identified, receiving consular assistance.

British officials did not say whether there are plans to evacuate British citizen. Professor John Watson, from the Department of Health, pointed out that the risk posed by Ebola virus to people living in the UK “continues to be insignificant.” The World Health Organization estimates that the current epidemic of Ebola, the worst so far, will be stabilized within six to nine months. The death toll has reached 1,427 people.

Two Americans infected with Ebola in Liberia, which were evacuated and treated in the United States have recovered and were sent home from the hospital recently. It’s about American doctor which was infested with Ebola in Liberia, Kent Brantly, 33, and was discharged Friday from the hospital in Atlanta where he was treated with an experimental drug that had been tested only on monkeys. Brantly and missionary Nancy Writebol, 60, contacted the terrible virus after several patients cared for in a hospital in Liberia.

“It’s a miracle, I’m glad I’m alive. While I was in bed in Liberia, and I got sick increasingly every day, I prayed for God to strengthen me in my faith. God saved my life, an answer to thousands of prayers. You have been my friends, my family. I will not forget all you have done for me, “Brantley Kent told the medical team at hospital discharge.

“Exiting the hospital two patients pose no threat to public health. After a series of stricter treatments and analyzes, the medical team has determined that patients were cured of Ebola,” said Dr. Bruce Ribner, head of infectious diseases department Emory Hospital where the two patients were hospitalized.

Liberia is the most affected country, with 1,082 cases (plus 110), including 624 deaths (plus 48).
In Guinea, there are 28 additional cases, so that the number of Ebola patients reached 607. Number of deaths increased by 10, reaching 406.
In Sierra Leone, there are 910 cases (plus 3), while the number of deaths rose to 392 (plus 18).
In Nigeria, the epidemic has killed one person.  Deaths balance is five and the number of cases is 16 (plus one).
On 8 August, the World Health Organization declared a public health emergency in the world against this unprecedented epidemic hemorrhagic fever and recommended taking extraordinary measures in affected countries.