Former Israeli prime minister Ariel Sharon was buried Monday afternoon at his family’s farm in southern Israel, with his wife Lili, as wanted.

These military funeral, eight Israeli army generals wore coffin wrapped in an Israeli flag while prayers were uttered. Later, they lowered the coffin into the grave and then covered it with earth. According to Hebrew tradition, the deceased’s two sons, Omri and Gilad, recited at the microphone “Kaddish” prayer of the dead. Earlier, a military rabbi broke their shirt collars as a sign of mourning. Funeral eulogy saying, Chief of Staff, Gen. Benny Gantz promised to remain faithful to the legacy of “combatant”, recalling his long military career. Some Israeli and foreign personalities appeared first U.S. Vice President Joe Biden and former British Prime Minister Tony Blair, Middle East Quartet emissary. 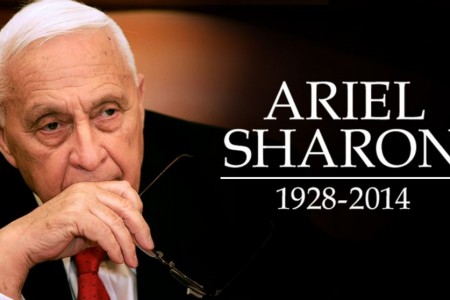 Several hundred Israelis attend the funeral from distance. Ariel Sharon’s coffin was taken to Sycamore farm, aboard a military vehicle after an official commemorative ceremony held in front of the Knesset in Jerusalem. Ariel Sharon, the eleventh Prime Minister of Israel, died Saturday at the age of 85, after being in a coma for eight years following a stroke.

Israeli army in the Gaza Strip spotted Monday launch of two missiles, but have not reached the Hebrew territory, where, near the Palestinian enclave in a few hours, will begin the funeral of former Prime Minister Ariel Sharon, who died Saturday at 85 years, according Agerpres. “Two launches were detected, but we are not yet clear in which direction were launched. As I understand, the missiles have not reached our territory, “said to the news agency quoted a spokeswoman for the Israeli army.

Military officials declined to comment on the information previously published in the media, according to which near Sharon family farm  – where in the presence of several people, including guests from abroad will be buried former prime minister – was deployed an Iron Dome antimissile battery. According to Reuters, the Israeli government has transmitted in Gaza, controlled by the Palestinian movement Hamas, that to not allow rocket attacks in the day of the funeral of former Prime Minister Ariel Sharon.

Sharon suffered a slight stroke on 18 December 2005, which recovered quickly. At that time he was busy with the launch of the new centrist party, Kadima, and was engaged in turning to political election campaign in January 2006. But on January 4, 2006 he suffered a second stroke, more devastating, while he was at his farm in the Negev and came to Hadassah Hospital in Jerusalem in coma and he never returned. In recent years, Sharon was assisted by his sons, Gilad and Omri, who decided to keep him alive with continuous care. But this time former prime minister gave no sign of revival.

The former general, who was for decades a top official in the regional political scene, was almost eight years confined to a hospital room, in front of a television screen.
In an effort to help him out of coma, his sons have thought a few years ago, Sharon to be moved to the family farm in the Negev, but the project proved to be impossible.

Two months ago, Sharon underwent a surgery that apparently failed. Since then, complications have multiplied and doctors were powerless. For a month he was transferred to intensive care and his condition seemed to have stabilized. But the situation has worsened from then.
Along with Sharon, was his son Gilad which confirmed the gravity of the situation to the press. So Ariel Sharon died Saturday, 11/01/2014, at the age of 85 years.