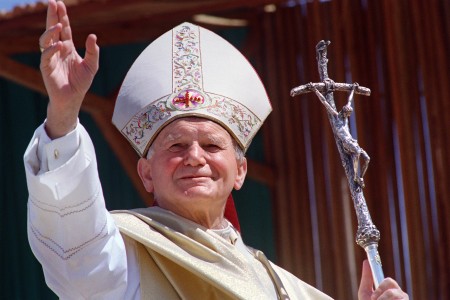 Pope John Paul II, under his real name of Karol Józef Wojtyła, served and led the Catholic Church for 26 years, from October 1978 until April 2005, when he died at 84 years, as a result of septicemia due to a urinary tract infection. Known around the world, Pope John Paul II, has passed through many dangers in life, disease and even some failed attempts to be killed. He survived and went still further, and still longer in the souls of many people, being venerated and given as an example in the present.

During this long period as Pope, Pope John Paul II has done some miracles including:

The first (and, some say, the most important) is the miracle attributed to Pope healing French nun Marie Simon-Pierre, aged 46, suffering from Parkinson’s the same disease who suffered Pontiff hurrying ‘s end. Monsignor Slawomir Oder, postulator of the cause of beatification of the deceased pope, said in 2006 that the official investigation of the case was turned nun, looking for its anonymity to avoid exert pressure on witnesses. Immobilized in bed, suffering – who later revealed the identity, writing and story in the second number of “Totus TUUS” – completely healed after all her community members from the Institute of the Little Sisters of the Catholic maternity divinity prayed, asking the intercession of Pope John Paul II. The miracle took place two months after the death of the Pontiff. “My healing is the work of God through John Paul II,” said the one diagnosed with Parkinson’s in 2001, while working at a hospital in Puyricard, near Aix-en-Provence. The first signs of healing have been felt a few hours after the start of collective prayer, when she realized that she has no longer pain in writing. After two months, she managed to get out of bed, kneeling to pray smoothly in front of the Blessed Sacrament. She then attended the Liturgy the celebration of the Sacred Heart, realizing categorically that escaped the terrible disease. Doctors confirmed that it longer has any of the symptoms, healing not having medical explanation.

More than 20,000 messages were posted to the site beatification of John Paul II (www.vicariatusurbis.org / beatificazione), many written not only in English but also in Polish, French, English and Spanish all referring to the beneficial effects or miraculous that having the prayers addressed to John Paul II. In May 2008, Tracy L., aged 42, from New Jersey (USA), as relate, sick with advanced stage multiple sclerosis and with excruciating pain every move, thought, in April 2005, after the death of the late Pope to write a prayer to it, asking him to help her through the intervention of the Blessed Virgin. After several months, exactly on October 16, she came with her ​​father at Lourdes, in France, during a pilgrimage organized by the Catholic parish to which they belonged. The two took part in at dawn prayer which also marked the day that Karol Woijtyla climbed on the chair of St. Peter, becoming Pope. After the sermon, Tracy went to the famous local thermal baths and continued to pray to the Blessed Virgin. A few hours afterwards, suffering could participate, aided, indeed, in the procession dedicated to the Holy Mother of God, and in the evening, sitting on the terrace of the hotel room and the sky, and realized as something miraculous happened. The next day felt great, although does not taken medication for more than 48 hours, and at medical examination in July 2006, doctors were amazed to find that he feels better. Also on www.IoannesPaulus2.org there are hundreds of testimonies in Italian, English, French, Polish, Portuguese, Spanish, about the former pontiff. Moreover, commenting on the evolution of the cause of beatification of John Paul II, his former secretary, Archbishop Stanislas Dziwisz, said that he sees no problem in finding a miracle to help the cause, more difficult is choosing one of many miracles attributed to the intercession of the late Pontiff.

After establishing and confirmation of miracles, has been decided that Pope John Paul II to be declared saint and Pope Francis decided to recognize all the miracles attributed to former pontiff. Francis Pope is going to set a date for the canonization of John Paul II, at a future meeting with the cardinals.