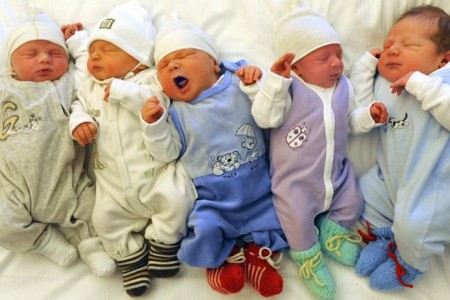 An Iraqi woman aged 40 years, mother of seven children, could make history, after doctors confirmed she’s pregnant with 13 babies. An Iraqi doctor at the Takreet hospital assured that tests and ultrasound scans leave no doubt on the status of women. Doctor Mikdam Al Jabour, who cataloged pregnancy as one of the “strangest” of the world, said that although she is in a good health, “four of the fetuses are already dead, since their hearts not beat “. He predicted that by the end of pregnancy, the woman will lose some fetuses.

Iraqi woman is expecting at home by seven children, including a pair of twins.

“I am very happy for my wife pregnancy, but also I am concerned about how I would take care of it to keep this divine gift,” said Fadhil Al Azawi, a farmer in Salahuddin province (central Iraq).
“It was a great surprise for me and I try to assure them special care. Childbirth will turn, probably, in the only father who has so many pairs of twins. “

Things between the couple were not just pink in recent years. Because she could not get pregnant, Fadhil decided last year to take another wife, taking advantage of polygamy allowed by Islam.

If goes through this “exceptional” pregnancy, as specialists called, Iraqi woman could give birth to nine healthy babies. So far, the record is held by an Indian that was born 11 children, though the veracity of this information is often challenged. “Official” record, Guinness confirmed, is of American Nadya Suleman, who gave birth to octuplets in 2009 – 2 girls and 6 boys.