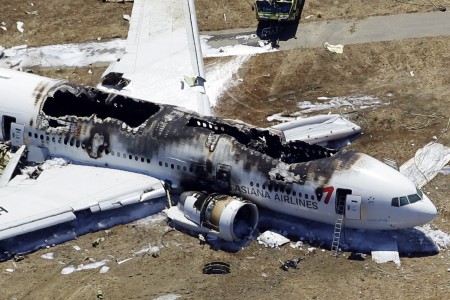 Airplane crash occurred on 06 July 2013, when the Asiana flight No. 214, having on board 291 passengers and 16 crew members came very down to landing reached the seawall and crashed. Following the accident two persons died, over 180 people were transported to the hospital, of which 49 have been in serious condition.

Accident investigators from San Francisco are wondering why the plane flew so low and why copilot upon landing with much more experience than the pilot did not say more about it before the ship Asiana Airlines to miss the landing, reports Los Angeles Times online.”Why have not talked much Asiana Airlines cockpit just before landing low and disastrous to San Francisco?”asks publication.
The paper recalls the “serious safety issues” that affected the company Korean Air many years, noting that they were caused in part by cultural issues of respect, in other words, co-pilots feeling obliged not question the pilot’s because of traditional respect to hierarchy and authority.

In the book “Outliers: The Story of Success” (2008), Malcolm Gladwell, a specialist in pop culture, emphasizes expressly on this supposed deference as a factor that contributed to the problems facing the company Korean Air.
Company “Korean Air has made more crashes than almost any other airline in the world, at a time in the late 90s. When we think of plane crashes, we think ‘Oh, you probably have old planes. Probably have poorly trained pilots. “No. actually struggling with a cultural legacy, that Korean culture is hierarchical.’re bound to be respectful to elders and superiors in a way that would be unimaginable in the United States,” says Gladwell.

“But Boeing and Airbus planes creates modern complex, to be piloted by two men equal. This works very well in cultures where power distance is low (like the U.S., where hierarchies are not so relevant). But in cultures where power distance is strong, it is very difficult, “added the specialist.
“I use the case study of a well-known crashes in Guam (a plane) Korean Air. Flies, have some problems, the weather is bad. The pilot makes a mistake and the copilot does not correct him. However as soon as Korean Air realized he had a problem of cultural, solved it, “he points out.

The newspaper asks whether such dynamics affect Asiana Airlines pilot, also a South Korean company, or whether two experienced pilots did not realize that there is a problem.