Many hotels in the world are no longer just places to sleep, but have become real tourist attractions. And this is to differentiate from the competition “around the corner”. Customers are tired of traditional services such as “bed and breakfast” and are increasingly demanding when choice vacation. Now are looked for very much themed hotels, unique architecture, and the services that they make available. Here are some of the most unusual, strange, funny and interesting hotels in the world. 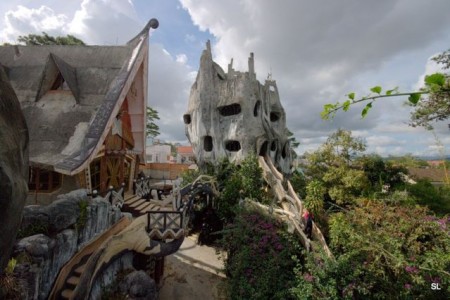 Hang Nga Hotel (known by locals as “wacky house“, “tree house” or “madhouse“) is located in the mountain town of Da Lat, Vietnam. It is considered one of the most unusual pieces of architecture in the Asian state. Unusual hotel is designed by architect Hang Nga, the daughter of a former president of Vietnam, which the government of Vietnam allowed to build it by own imagination, without taking into account the legislation and the rules of urbanism.
Hotel Vietnam seems at first glance a similar construction of a tree trunk. The 18 rooms are meandering and windows are like the tree hollows. Many inner bridges, bizarre, that “intertwine” the rooms, form small mazes.

“Crazy House” is full of herbs, twigs, tree moss, resin, birds, spider webs, huge animals and many other curiosities. Do not be frightened, these are all artificial, but successfully creates a magical atmosphere. If you want to find accommodation for the night in the successful attraction of Vietnamese city, you can opt for one of the themed rooms: Room of lovers (perfect for honeymooners), termite room, Bamboo room, bears room, ants room, peasants room, lions room or eagles room. More pictures here. Prices range between $ 34 and $ 67 for single rooms and between 47 dollars and 84 dollars for two people. Reservation. 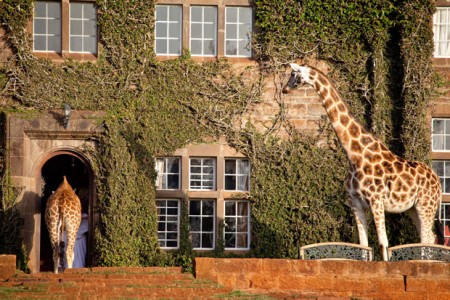 If you are fascinated by African culture and the wild expeditions attract you, then The Giraffe Manor (Manor giraffes), Nairobi (Kenya), is the ideal destination for you.
The mansion was built in 1932 by Sir David Duncan, and remodeled after a Scottish hunting chalet. Since 1984, the building was converted into a hotel.

What makes this hotel so special? The fact that it is surrounded by giraffes who have lost their natural habitat. Beloved animals have become so accustomed to humans that have come to greet our guests, even entering the building through the window and allowing them to feed or to photograph.

The small hotel is surrounded by approximately 140 acres of native forests. Besides giraffes, manor houses a lot of species of birds, wild boars and even antelope families.
Spectacular is the fact that The Giraffe Manor has views to Mount Kilimanjaro, Africa’s highest mountain. More information about how to book your overnight stay at the Mansion giraffes find here. 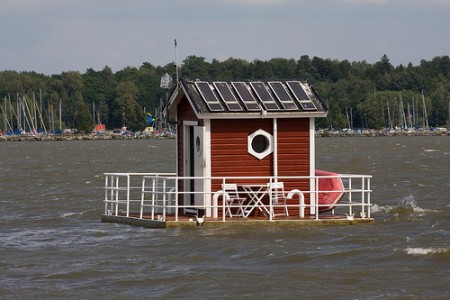 Hotel Utter Inn is an artistic project developed by Mikael Genberg. The hotel looks more like a warehouse isolated in the middle of Lake Mälaren, Sweden.

If we say that the bedroom is located three meters below the level of lake, with windows on each wall of the room, so that you can see aquatic creatures, we are already talking about a really special hotel. Swedish locals tend to call it “the place where you sleep with the fishes”.

Utter Inn is a floating house. Most tourists come here by boat and stay one night. And this is due to the fact that there are only underwater room two beds and a table. If you suffer, therefore, of claustrophobia, Utter Inn is not ideal place for you. See photos here. 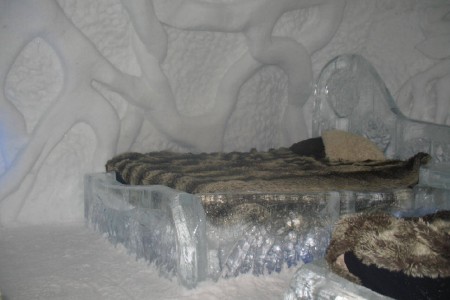 How about an ice hotel? In December of each year, the artists (sculptors) begin to build the Ice Hotel in Quebec, Canada, which is open from January 7 to March 27. Each time, however, it has other forms with which to impress the tourists thrill seekers. 400 tons of ice and 12,000 tons of snow are needed to build it. All things that are in the hotel made ​​entirely of ice: tables, chairs, glasses, including fireplace. The only heated areas are baths, for not putting tourist health in danger.

The hotel rooms are like ice caves and the windows have curtains instead of doors. In some of the rooms there are fireplaces, but all heat pipes are outside the “building”, because “bedrooms” not to melt.

Are you wondering how you will survive one night in such a hotel? Do not worry, you will receive instructions on how to not frozen during sleep. Moreover, the Hotel de Glace there is a disco (all ice, of course) and a chapel, the latter being one of the best rated locations for weddings in Quebec. Every year, dozens of couples choose to get married in the ice chapel.

Packages start at $ 150 for two nights, but you have to make your reservation early, because there are many eager for hot sensations, willing to live a unique experience. 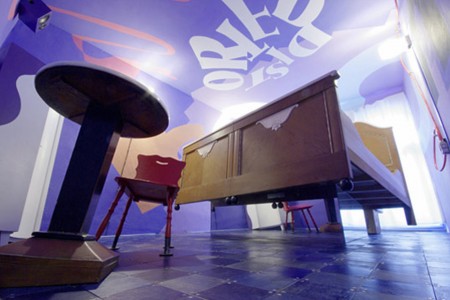 Propeller City Lodge Hotel, located in the capital of Germany, is, like the others, a quite unusual hotel. Lars Stroschen artist created each of the 31 rooms of this hotel, with a particular theme. These include: flying room (the bed levitates), the upside down room (have furniture on the ceiling) or vampire room (beds are shaped like coffins). So, the rooms are unique, funeral, religious, funny or simply … very strange.

Most of the tourists who were staying here, said the Propeller City Lodge is “a work of true originality.